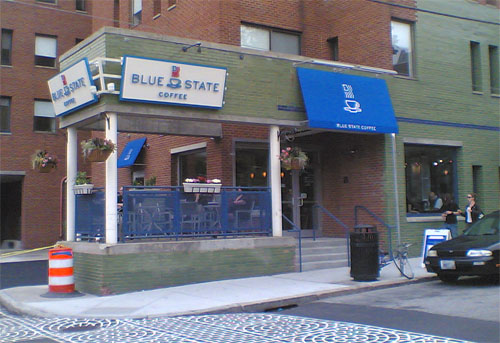 Last spring I was delighted to learn that Starbucks would no longer be the only coffee house on Thayer Street. An independent establishment, Blue State Coffee, was on its way. I wasn’t sure about the name (a reference to Rhode Island’s official nickname perhaps?), so I looked it up on google. This page from bluestatecoffee.com immediately cleared things up:

Every time you drink a cup of our premier quality, perfectly roasted, fairly traded coffee, you’re contributing to a positive movement for change in this country.

The idea struck one Saturday morning during a coffee-and-donuts run for the rest of the family. Standing in line, we started talking politics. “Wouldn’t it be great,” [my son] Drew commented, studying the elaborate menu, “if profits from all of these lattes could be channeled into great causes?”

It made sense. People wouldn’t need to find more time or spend more money. They could enjoy the highest quality coffee and support the progressive causes our community cares about

After reading this, I was promptly less delighted about Blue State Coffee. I like progressive politics as much of the next Rhode Islander, but why the hell does it “make sense” to link a coffee to progressive causes? You could have the exact same thought at a tire yard. The whole concept struck me as a highly questionable business decision.

By late June my enthusiasm was partially renewed. I found out that a former bartender from Brown’s own GCB would be managing the shop. In mid-July though, things took a second turn for the worse. When walking by, my housemate and I spotted large amounts of brushed metal being installed. This did not compare favorably with the wood interior of the Coffee Exchange, the gold standard for East Side coffee.

About a month ago I returned from New York to discover that Blue State Coffee had opened its doors. Given the emotional roller coaster ride leading up to this moment, you can imagine how excited I was to try some (probably even more excited than you are right now reading about it). I ordered a latte, and although the texture was excellent, the coffee itself tasted a bit watery. The next day I went to good ol’ Starbucks and that latte didn’t taste very good either. I decided I’d been tainted by Joe back in NYC.

Since then, I’ve been back to Blue State Coffee many times, and I’m happy to say things have dramatically improved. I dare say their latte’s are superior (and certainly stronger) than anywhere else by Brown. Also, they have have baked goods from Seven Stars, which is nice, along with free WiFi, outdoor seating and biodegradable cups. Now that they’ve won me over, they’d better survive long enough for me to get my degree.