In culinary terms, the amuse bouche refers to the tiny bite-sized morsel that precedes the first course, an introduction of the chef and preview of the meal to come. Amuse My Bouche refers to the food column that you find here on Providence Daily Dose, promising local restaurant reviews, Providence food&bev industry gossip, and general sass on the subject of eating & drinking. 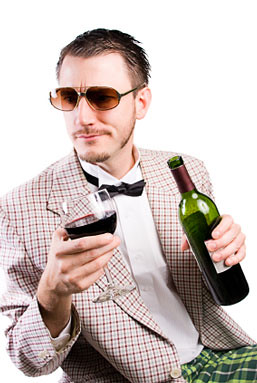 I’m a lady who loves her drink.

One thing I don’t love, however, is the markups on wine at restaurants. There’s nothing more frustrating to a thrifty patron than an $8 glass of wine that comes out of a bottle you can get for $11 down the street. I understand why restaurants do it. It’s not an easy business, and if customers accept it and pay a 100% markup, how can I blame them?

A noted antidote to the standard alcohol markup is the BYOB. In case you didn’t know, a Bring Your Own Bottle (or to be crude, Booze) is an establishment that hasn’t obtained a liquor license, but in many cases serves some of the best food in town. It’s a great deal: you enjoy a meal where the focus is on the food, all the while sipping the super-cheap wine you would have been drinking on the couch with the mediocre takeout or the half-assed homemade grub you put together after a long day at work.

In Philadelphia, my strongest point of reference for the biz, BYOB’s were the hottest restaurants in town. These were places where younger, up-and-coming chefs could obtain a small space to offer up their craft to the foodie population without the competitive costs of a liquor license. Now, I know we are not in Philadelphia, but just to name a few great BYOB’s: Pumpkin, Django, Melograno, Audrey Claire, Marigold, Lolita, Rx, Dimitri’s, Las Cazuelas. These were the places with two hour waiting lists on a Saturday night: maybe because they were places to be seen, maybe because they were home to the most talked about talents in town, and finally because the kitchen cooked with heart and principle that you just don’t find in well-financed restaurant endeavors.

Upon moving to Providence, I was sure I’d stumble upon some great BYOBs. I have discovered many, but not the type that I’d expected. Instead of the protégés, the dreamers, and the broke-but-classically trained geniuses, I have found some fantastic, authentic, and affordable ethnic restaurants that let me bring my own. I’m not sure what about Providence creates such a different BYOB experience (though Nick’s on Broadway fit the mold just 8 months ago), but places like Pho Paradise, Not Just Snacks, and Casa Christine have assured me that in general, BYOB’s maintain the same integrity I’ve tasted in that other city. There is generally a small corkage fee, but shared with a few friends, that $5 is acceptable.

A few that I’ve enjoyed, and these are no big surprise:

Pho Paradise, 337 Broad Street, and Phonatic, 165 Angell Street. Pho Paradise has an extensive menu, at least 100 items to choose from, with plenty of options for vegans and vegetarians. I can promise that this menu translates in any weather situation. Cold and rainy spring day? Any one of the pho, a soup with fresh basil, cilantro, lime, bean sprouts, and other fixings on the side, along with a hot green tea will provide immediate comfort. Hot and sticky summer afternoon? The tofu salad, made of chilled fried tofu, cabbage, and dressed with lime, is light, tangy, and somehow filling. Any time of year, tofu and vegetable curry is the most ideal mixture of sweet and spicy. Just off of Thayer Street, you’ll find an eerily similar spot. Apparently Phonatic has a bad reputation from a restaurant that occupied their location years earlier, but it has since been bought out by the same owners as Pho Paradise. Eastsiders should give this place another chance. The food is excellent, the menu is identical to that of Paradise, and the service is very sweet, earnest, and knowledgeable.

Not Just Snacks, 833 Hope Street. I really cannot say enough good things about this restaurant. If you can handle heavy spice, semi-gloss white paint on the walls, fluorescent lighting, and a corkscrew left on your table as you pull out the wine bottle from a paper bag, go to this restaurant because the food makes everything worthwhile. While I’ve had experiences at other Indian restaurants where the food is bland and lukewarm to cold, Not Just Snacks always tastes fresh and hot, as if it were made to order.

Taste of India, 230 Wickenden Street. Not great like Not Just Snacks, I’ve been satisfied by the food at Taste of India. What I really appreciate here is the lunchtime buffet. I guess it’s pretty ballsy to bring booze to a restaurant in the middle of the day, but I encourage that sort of thing. Take a day off, get hammered, and spend the day lounging and going back to the buffet over and over again.

Sakura, 231 Wickenden St. As I’ve said before, I believe that New Japan is legendary, but there are a lot of people who love Sakura, so I’ve included it here. The sushi is very good. Okay, but I still can’t get over how mean the servers are. Really, I’m about to pick the last tuna roll off of my sushi boat, and these ladies have already started bussing my table? Maybe I’m supposed to drink. Maybe that makes their indifference taste better.

Casa Christine, 145 Spruce St. (next to Casserta’s). I’d intended to do justice and offer up a description of Casa Christine, but I visited this spot on Friday night and have since decided that it deserves an entire post. Google “Casa Christine Providence”for a sample. The hostess/owner might be a tyrant, but devoted customers keep coming back for the food, and I’m no different.

It was all so good… I have to go back…Tomorrow.

2 thoughts on “Your Momma Brings Her Own”