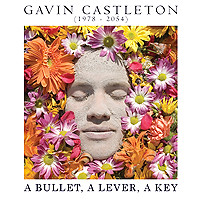 As impossible as it truly is to pigeonhole Providence’s own Gavin Castleton, the Phoenix could probably do better than “Best Local DJ/Electronica Act 2005, 2006, and 2007” — the singer/composer/rapper/producer rarely spins wax and isn’t exactly a dance music auteur.

What he is, however, is a truly brilliant musician who takes risks in crafting his unique blend of indie rock fused with the occasional dose of rap, harkening faintly back to the days when he graced the stages of Lupos and the Met as rapper Flint.

He’s been a personal favorite of mine since I was a pedastalizing-ass teenager, so while this should be considered a serious review of his new EP, A Bullet, A Lever, A Key, take this as a note from someone who has been listening long enough to gain some perspective on Castleton’s method and personality, yet still finds himself delightedly moved and often genuinely surprised by his work. For me, he’s the kind of particular musician that makes Providence feel like home.

To put it simply: this album an autobiography of Castleton himself. But in classically Castletonian form, the album bends space and time, telling his life story in reverse. The album begins with the end of his life in the year 2054 and climbs backwards up the tragic falling action to a pivotal day in the year 2007 in which Castleton decides that he’s had enough of watching his friends’ lives simplify while he himself stands proud, trying to ‘make it’ as a musician, and declares — in the album’s closing line — “Tomorrow / I’m going back to school.”

But at the album’s start, the Castleton that greets us from 2054 is weary of life. Castleton’s voice almost sounds as if he truly has aged a half-century, and his words are heartbreakingly at peace with the futility of his existence. With halfhearted resolve, Castleton chillingly raps, “Some people feel that the world wants them around / I decided 10 years ago I didn’t want all that time. / For me, 76 is enough. / For me, 76 was… too much.”

As the album proceeds back in time — through the loss of his job, the estrangement of his family, and the loss of his young love, for whom he tragically swears to leave music behind once-and-for-all — we trace the path of a Castleton who has chosen to deny himself, to give his life to the people he loves rather than to the art form that he once believed he was destined to contribute to in a meaningful way.

Each of these life events is narrated in Castleton’s half-rap, half-spoken word delivery, used previously on Grace Land. However, on that album, Castleton used pitch-changing effects to modify the timbre of his voice and more accurately channel the neurotic, dysfunctional Gary Tivoli, and at times the result could be stressful to listen to. The entire project had sort of the feel of an episode of Curb Your Enthusiasm — undeniably dope, but once you knew where things were headed… stressful.

On A Bullet, A Lever, A Key, Castleton is much more engaging as himself, and the songs are illuminating enough beyond their narrative value to bear repeat listens. Castleton’s crisp falsetto, used so effectively on Hospital Hymns, is beautiful but sometimes a frustrating contrast to his easily-understood narrative delivery. It takes a few listens to understand the relationship between some of the album’s sung choruses and its verses.

Musically, Castleton’s vocals are accompanied by beat-driven, nearly-cinematic scores that generally harken to hiphop rhythmically but which are much more organic and layered than you would expect from a rap concept album.

This seems to allow him to more effectively marry the narrative and the music’s texture, which shifts and changes behind Castleton’s delivery, but ultimately is centered around it. On repeat listens — as with the lyrics — there is a lot of complexity to digest, but at first Castleton’s narrative will probably be your focus.

The disingenousness, delusion, and blatant highway robbery of the music industry have long been favorite topics of Castleton’s ever since his days as a member of the enduring Providence “futurock” 6-piece Grüvis Malt, which in spite of their unfortunate moniker verged on national success in 2002, and exists today mostly as a “family” which apaprently may or may not ever return to touring or recording. Highlights include Grüvis’ cantankerous “What Ladder?” (and its even-more-cantankerous Rant Remix], their sarcastic, label-douche-pwning “B612”, and Castleton’s 2004 track The Great American Bottleneck, a brutal and precise analysis of the power of the Internet and a eulogy for the musical establishment.

But the closing track of A Bullet, a Lever, a Key, in which Castleton’s alternate self chooses to leave music behind as a career path, is his most desperate and honest statement of the frustrations that Castleton — an artist who has made no secret of his contempt for those who approach music primarily as a business opportunity — experiences in the pursuit of his profession. Backstage at Lupos’, he interprets the look given him by a member of another band as one likely to be shared between “theives on a heist”; he steals food from the headlining bands’ cornucopic buffet, knowing both that he’ll later be hungry and that he is unlikely to be compensated for his performance. “I’m not mad that I don’t have [luck],” Castleton explains, “I’m mad that luck should have anything to do with being an artist.”

Castleton does ask a lot, sometimes, of his audience. This album is characteristic of Castleton’s mantra of creating “foreground” music; he wants the listener to think deeply about his art and its density of ideas can require a lot of attention paid to receive an enjoyable experience. The question then becomes, does Castleton hold up his end of the deal? Does he reward that attention with a true aesthetic experience? And consistently, I believe, he does. “But,” in the words of the Immortal Lavar Burton, “don’t take my word for it.”

The wonderful opening trio from For the Love of Pete, “I’m Not So Proud”, “Tiny Triggers”, and “You Should Sleep,” play on the front page of Gavincastleton.com.

Gavin Castleton on Myspace, featuring various tracks, including “2007” from A Bullet, a Lever, a Key.

Castleton’s also a writer of sharp and witty prose. Check out Castleton’s blog, an experimental attempt to interconnect all his recent work of the last few years.