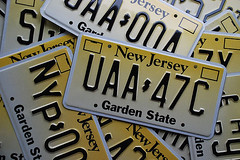 Cause if you can’t trust a Jersey Girl for some much-needed sex and dating advice, who can you trust? Lets just get right into it this week:

Q: Ladies,
I’ve been dating this guy that I see about once a week. The sex is good but I feel like we’re falling into a little bit of a routine. We meet up for dinner or drinks, come back to my place and our clothes are off in a matter of seconds. The first few times when we didn’t make it past the kitchen or hallway were exciting. The sense of urgency is really hot but I need him to slow down if I’m ever going to be able to get off! How can I get him to tap the breaks a little bit?

A: Well, bonus for making it out of the car I guess. Some of us (cough, cough) have struggled with that in the past. Shit, congrats for making it out from the alley behind the bar! It feels great to have someone who can’t wait to get you naked and ravage you. We have to agree that the urgency is super sexy—at first. A lot of guys think they have to jump right in to get you going and overlook the importance of say, making out, teasing, slow stripping, and (gasps!!) second base!

May we suggest a night in? Maybe the build-up from the great chemistry, intense flirting, and tequila shots you two share leave him unable to help himself. Maybe you’re just that good. Or maybe this guy is a horn dog who needs a serious scolding from the vagina whisperer. Either way, starting the party in house will, if nothing more, help you break the cycle. We can’t imagine he’d fight the idea of grabbing a decent bottle of wine or good 6-pack, and watching a movie you’ve both seen too many times so it wont matter when you start gong at it 27 minutes in. Wanna know a secret? One of us has never seen all of Fight Club. We know, it’s terrible. Good Will Hunting either. Why watch movies when you can make out? Pick up a classic like Spartacus and seduce him. Oh yeah, and watch the movie in your bedroom or on an actual piece of soft furniture. Make a move, start slow, maybe he’ll get the hint and follow your lead.

If he’s not the “stay-in” type or you think it’s too soon to come off too “couple-y” and just want to change his approach to your little um, after party–your best bet is to just speak up. Take charge! Instead of letting him strip you down before you even make it up your steps– grip him up. Throw him down and pin his hands above his head. Tell him to slow down like you mean it and show him what you want by doing it to him. Be vocal. Tease him. Show him how nice it is to take the time to watch and enjoy what you’re doing for one another. A little dirty talk might help too. Be very specific. Softly asking to slow down or speed up doesn’t get the point across quite like, “I can’t wait fuck your face and then let you slowly slide your huge…” you get the picture. It takes balls to say exactly what you want, but it’s worth it. How else will he know if you don’t tell him?

Q: Dear S&M,
My douche bag ex boyfriend broke my heart. He cheated on me, dumped me and is now dating the girl that he cheated on me with. As if that alone weren’t enough– I see them everywhere. I don’t want to compromise where I hang out just because they might be there, but at the same time –I’m still totally hung up on him. I’m trying to meet new people and move on, but it’s hard when I can see him from across every darkly light bar in town. What’s a girl to do?

A: Ouch. Love hurts. Don’t it? As strong headed, independent women ourselves, we must first applaud you for not giving up your favorite watering hole. Why should you? Why should he win? However, these seemingly strong traits of character can quickly become other reasons for going, like, to stalk him with his new broad or intentionally try to flirt with other dudes in front of him in hopes of making him jealous. This will just make this already hard process of getting over him – even harder. Like we said, kudos for sticking it out, now, get the fuck out of there.

We’re not saying stop going to the bah. Just switch it up a bit, add a new bar to your repertoire (preferably one you wouldn’t normally go to) or reach out to some friends who can lead you in the right direction of a hotter club, pub or seedy college hang out.

You’re not going to meet someone if he’s there. You probably know half the bar and most of the staff at this point, right? Those odds are not in your favor, and although a familiar place can sometimes be an easy way of meeting more people – chances are they’re his skeevy drunk college buddies or old band mates anyway.

Give these new places a try, maybe you’ll meet someone new (the perfect distraction from Mr. Ex if you ask us) and then, then – you can flaunt him at your old place like the sassy bitch we know you are.

Q: Okay,
I’ve been dating this person on and off and it seems okay but they have this thing where they write stuff about their dating life on their Myspace blog. Stuff like “dating in this city sucks, and all people are jerks,” and we’re dating! I feel like if we broke up I’d be reading about it afterwards. Should I just get out now?

A: See, this is why the Internet sucks. What a silly bitch! The whole reason the world blogs is to be heard. Does she really think you’re NOT reading that crap. It directly involves you. There are a million articles about how the Internet, Myspace, and Live Journals are the demise of mystery in relationships, but its so fucking true. How private of a person are you? Clearly she has no problem hanging her dirty laundry where the neighbors can see. You’re not too keen on that idea and we don’t blame you. She’s not taking you or your feelings into consideration. She’s either dumber than you thought or just doesn’t care. Then, there’s the worst-case scenario—she’s trying to “tell you something” knowing you’ll read it. Via Myspace. LAAAME. We suggest ending it via Craigslist missed connection or AIM chat just to give her a taste of her own medicine.

Q: Jersey Girls,
I’m about 3 months into my boyfriend’s year-long stint overseas in Iraq. After much coaxing I’ve decided to send him some nudie pics of myself. Any tips on how to look hot naked without breaking my back or looking like a whale?

A: Look at you all doin’ somethin’ for your country! How sweet. We will spare you the lecture on how you should really, really trust anyone you plan on giving that kind of power to–not to mention the fact that his soldier buddies will probably get a peek at your unmentionables at some point as well. Cool with the idea that your hoo-ha could get plastered all over the internet if you ever piss off this guy enough? Then proceed you filthy animal…

Any chick (or narcissistic pretty boy) with a Myspace account has probably held some sort of solo photo shoot with a web cam, digital camera, or cell phone at some point. The most obvious photo tip? Take pictures from above. You’ll look like 20 lbs. lighter and although we don’t advocate lying to your dude or whatever – we do support making you feel more confident about sending your boy some frisky nude photos.

Lastly, got a laptop? Does it have a camera on it? You can straddle that camera, right? Need we say more? Maybe a crotch shot is a little too forward for you? Just think about this, anyone can recognize your face but your lady parts….just sayin.

If you’ve got issues, ask the Jersey Girls…

12 thoughts on “Ask The Jersey Girls”