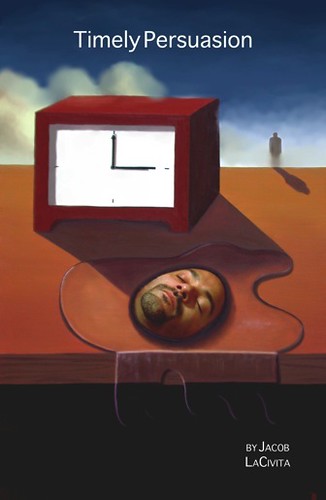 Now that the holidays are over and the weather is frightful, or at least blah, I’m reading again.  And it was hard not to pick up a book tagged, “What did Kurt Cobain, Jimi Hendrix, and my sister have in common? They were all my friends, and they died” paired with the synopsis, “This story of death, life, love, and rock & roll defies genre conventions while paying tribute to the classic time travel tales that came before it.”

Jacob LaCivita’s Timely Persuasion takes “Quantum Leap” one step further.  Its protagonist’s wild ride to save his sister’s life without ruining everything references things most Dosers will like: the importance of libraries; Britpop; sci fi; movies like Being John Malkovich and Wayne’s World; a Nirvana concert at Fitchburg State University I attended in high school; and of course what all Rhode Islanders love best: local mentions of Providence, including a specific show or two at Lupo’s.  What’s not to love?


Pros: I love when science fiction happens upon otherwise “normal” life (like in LOST). The protagonist is a typical guy, although a bit of a deadbeat, until his run-in with an old man that turns out to be his future self opens a whole can of worms.  Also, the story’s abundance of lyrical references (tiny sampling: 311, Indigo Girls, Wilco and Dinosaur Jr.) is fun. Once or twice the protagonist is called out on his tendency to speak in lyrics, but mainly it’s seamlessly in the narration.  Even the chapter titles are songs by Johnny Cash, the Beatles, Beck, Lynard Skynard, Bob Dylan, Jens Lekman, the Breeders, Happy Mondays and Pavement. (Those I knew. I resorted to Googling the others, ‘tho most of you music-lovin’ Dosers likely would have known them already: Mr. T Experience, Matt Ward, Devics, Supergrass, Carter USM, Phoenix Mourning, The Black Keys and 22-20s.)  Working real music events into the plot helps the protagonist pinpoint his leaping self in time and grounds us readers, too.

Cons: It took a few pages to get used to the narrator’s slightly explainy style and not be in such a rush for action.  And although I love the investigation of Kurt Cobain’s death, which isn’t a major plot factor so I’m not ruining it for you, it led nowhere.  Finally, I wish the narrator’s sense of humor shone through more often (my favorite line: “And when I say jackass, that’s just a euphemism for fuckhead”).  But I can see why he had other stuff on his mind.

And speaking of ruining the plot, which I’m still not, another clever detail of the novel was its ending with a “prologue (reprised)” instead of an epilogue.  Tee hee.

You’re welcome to borrow my copy; you can get your very own custom-printed OR in PDF form at lulu.com; or if you’re feeling cheap/broke, you can read it online for free.

2 thoughts on “Buy This Book (or get it free, whatever)”