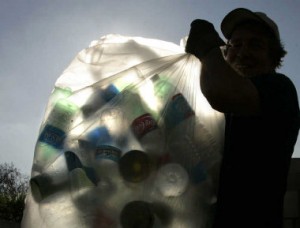 Forget about soda bottles and beer cans on the side of the road: ProJo, Boston Herald, WRNI, and, I assume, other leading news outlets, breathlessly report that desperate people are coming down your street once a week to steal stuff you’re trying to get rid of anyway.

Problem? Hey, this is Rhode Island. You better believe there’s a problem.

It wasn’t the first time Zolli had seen it happen, and she was irritated. “I called the police,” she said.

If caught, recycling thieves can face fines from $50 in Providence up to a staggering $500 for a third offence in Pawtucket. But most never get caught, and the few who do are usually let go when they surrender their booty.

To combat this scourge, recycling coordinators urge watchful residents to call the police. Cities and towns take it seriously, because they lose their share of the lucrative revenue they get through RIRRC’s sale of recyclables, estimated at $11 millon in 2007, over $2M of which was redistributed back to supplying municipalities. Why, East Providence may have lost as much as $450 last year alone! Another suggested strategy is to put out recycling just before the right vehicle comes along.

No one seems to be suggesting that Rhode Island join in the redemption fun. Probably for fear of cost. After all, Massachusetts paid for as much as 20 percent of redeemables stolen from Rhode Island last year, on top of nearly 70% of their own in-state redeembale sales, only profiting about $38 million (not including their own resource recovery sales).

Heaven forbid we follow their long-proven success, co-opting the unpaid force of tens of thousands of residents in putting recycling where it belongs and keeping riff-raff off our streets and out of our bins.

7 thoughts on “A Nickel of Wisdom”