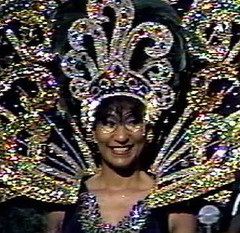 At about 8am this morning the Zulu Social Aid and Pleasure Club parade rolled out along St. Charles Avenue toward Canal Street shocking tourists who may have thought they were ready for anything.  Mardi Gras revelers by now expect to see naked titties by the boatload, but what may still have the power to shock are the floats and riders of the Zulu Krewe. According to The New York Times,

Many of those on the floats and marching with them are in blackface. What’s more, many also wear fright wigs and grass skirts and are handing coconuts to clamoring parade watchers.

The scene looks like something from an old social studies filmstrip about stereotypes and how to avoid them, the kind of thing that crops up today mostly in news accounts involving students being expelled from school.

Complicating matters, most of those in the parade are black.

Pictured here is two-time Zulu queen, Desiree Glapion Rogers, better known now for being the social secretary in the Obama White House. This was pretty big news in the krewe community (Mardi Gras Digest) . Who am I to question any of this? New Orleans has always defied (and discouraged) analysis. Let the good times roll!