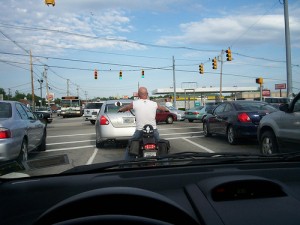 Wesli wrote this a couple of weeks ago, but we just noticed that it was languishing on the Side Blog. Also, there was a caption under the photo which was screwing around with the formatting. It read “Hartford and Atwood, in Johnston: Our economy, and our business appeal, can only move as fast as our people. How many cars to buses are visible here?”

CNBC scored each state on “40 different measures of competitiveness,” then ranked them in “ten broad categories.” In overall aggregate, Rhode Island ranked #48, ahead of Hawaii and Alaska.

We scored about average in Workforce, Quality of Life, Technology and Innovation, and Education. We scored well below average in Access to Capital, ahead of only about a third of other states. And even worse in Cost of Living, ahead of only one fifth. The four remaining scores are where we bombed out.

As often charged, our Cost of Business is unfavourable. We beat out Connecticut, Hawaii, California, and New York (in that order). And our perceived Business Friendliness (they’re a little vague on exactly what this means, but it’s got to do with regulation and litigation) beats out only Hawaii, California, and West Virginia. (From my perspective, the only category in which Hawaii can’t somehow lay part of the blame on geography.)

For Economy, we’re dead last. CNBC rated us on economic diversity (a long-acknowledged weakness), and the total number and variety of major corporations. This obviously doesn’t count major companies located right around us, who employ many of our people, but in terms of state tax revenue it’s as valid as if they were in, well, Hawaii.

More surprising is our appalling score in Transportation, ahead only of states you can’t get to without crossing an ocean or another country. CNBC says they rated by “value of goods shipped by air, land and water,” “availability of air travel,” and “the quality of the roads.” While they don’t supply specific ratings on these points, we might hazard some guesses on where and how we come up short. For one, a major Rhode Island industry, finance, delivers its goods mostly by wire and post. Deficient and disappointing as they can be, rail and bus is pretty good in Rhode Island, compared to many states, probably most of them; yet CNBC apparently doesn’t consider these important. And how much air capacity do we need in a state so small? Isn’t Greene big enough? Surely we’re not worse than every other continental state in these areas?

It seems reasonable that it’s our roads that sank us here. We’ve got a lot of them, and a lot of bridges, and most of them pretty much suck most of the time, when they’re even open. Friends of mine from out of state routinely remark how awful our roads are. ProJo reported some years back a study estimating that vehicle repair is over $800 higher per year than the national average due to our crappy roads. We’ve all seen sections where there’s as much — or more — patching than original pavement. And how many of our vital bridges are now underweighted, shut down, or overdue for replacement (thanks to our longstanding tradition of saving money by not maintaining them)?

But it will take much more than aggressive road and bridge work to fix this. We also need to get people off the road. We can’t increase the space we have for roadways, and we’re already built beyond reasonable capacity. We need to encourage and enable people to walk and bike more, and develop more and better transit for those who can’t. It’s not our worst area, only one of the worst. But the very fact that CNBC doesn’t seem to value commuter transit points to a big reason for why getting to work in such a densely populated place sucks these days. CNBC might not take it transit seriously, but unless we do, we can expect to keep coming up short in several business areas.