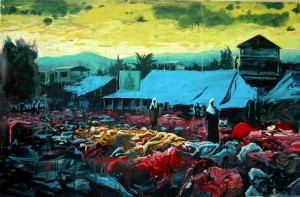 All the news that’s fit to paint

Tsunamis kill people in Bali. Car bombs kill people in Iraq. The Internet is killing newspapers. The major news networks report on these killings with state of the art sensationalism and hi-tech dehumanization. Rhode Island artist David Barnes paints this process and the result is benignly seductive.

Starting this Friday, Barnes’ work will be on display at the 5 Traverse Gallery. The exhibit runs until September 13 and you don’t want to miss it. To paraphrase NBC, this is Must See Art. The exhibition is a collection of watercolors and oil paintings based on video stills from the nightly news. In his three large oil paintings, Barnes depicts street scenes from the world’s most televised locations, places where the major TV networks can always bank on environmental and political catastrophe. Unlike the major networks, Barnes treats the subject matter with the utmost sensitivity and sensuality. He achieves this by rendering his victims and onlookers in serene blues and grays that I dare liken to Picasso’s blue guitar. His colors are poetic, whether depicting a mass of body bags in an Indonesian marketplace or the dusky hues of evening prayer in downtown Jerusalem. (more after jump)

What’s most impressive and admirable about Barnes’ treatment of human tragedy is that he doesn’t portray the moment of impact. There is no specific cause or object of suffering. The catastrophe is mere background. Instead, we bear witness to the assembling crowd, the gathering of a collective emotion. We observe them from a perspective that is distanced without being detached nor voyeuristic. If anything, the perspective seems to take a thoughtful step towards the commotion. This is a testament to Barnes’ talents as a painter. He is a figurative artist who knows when to be representational and when to be expressionistic. The contrast of thick and thin lines gives the paintings an urgency that nightly news broadcasts can only achieve with gimmicky computer graphics. There are no close-up shots of agonizing faces. Barnes doesn’t need them. The figures themselves and the ways in which colors combine to make form is what evokes the despair and anxiety of living in a volatile region.

These paintings are wonderfully anxious, but not in a panicked, neurotic way. They are sad, but not like a tear-jerking episode of Extreme Makeover: Home Edition. It is a contemplative anxiety as Barnes’ paintings are as philosophical as they are artful. They are philosophical without being conceptual. The paint itself does all the philosophizing. His oils are painted on aluminum newspaper plates. This technique speaks volumes about the alleged death of newspapers given the fact that Barnes is painting video stills from the nightly news onto aluminum printing plates. Along with drips and scrapes, there are wipe away sections where the aluminum is completely visible. Decade-old headlines and photographs of American sports stars read through the uneasy streets of Bali and Jerusalem. This allows Barnes to make a cultural statement without being polemical, and more importantly, without subverting his aesthetic. Because Barnes is too good an artist to resort to polemics, this reviewer will gladly do it for him.

Something must also be said about the execution of Barnes’ watercolors. They were inspired by Rodin’s black drawings consisting of ink and gouache. Watercolor emphasizes the spontaneity and accidental nature of Barnes’ catastrophe content. Like his oil paintings, it allows him to be both figurative and expressive. His collection of watercolors entitled Holy Men, offer the viewer little in terms of information pertaining to the significance of these men and the crowd gathered around them. Again, Barnes separates his art from the sensationalistic media that inspires it. Unlike CNN and FOX, Barnes does not glorify nor exploit the event. He glorifies the paint and not the hurricane or car bomb just as Manet did not glorify the courtesan in his painting Olympia. People were not appalled by Olympia’s nudity, but rather that Manet had painted a naked body as it was actually seen by the human eye, without any artistic pretenses. Barnes treats his subjects with the same honesty, but now, a century and a half later, artists must remind viewers how to perceive reality due to a lifetime of watching high-definition sensationalism. Barnes does not paint world events as we see them. He paints them as we should see them. His version of the news is much more believable than that of either Brian Williams or Shepard Smith. It’s too bad that every American household doesn’t have a Barnes painting in every room in place of a television.