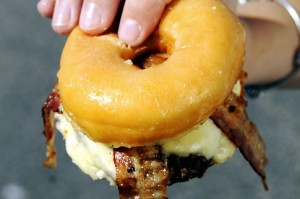 Another good reason to go to Jess and Jenna’s Young Invincibles Dance Rally in support of health care reform this Friday: your heart will soon explode*.

First KFC introduced the Double Down chicken sandwich exclusively to Providence and Omaha, Nebraska (Two kinds of cheese? Chicken breasts instead of buns? Thanks, KFC!). Now southern New England is being treated to the Craz-E Burger, which makes the KFC sandwich look like something Madonna eats in her macrobiotic, cryogenic death chamber of anti-joy.

At a whopping 1,500 calories a pop, the Craz-E Burger’s evil genius lies in the glazed doughnuts that are used for buns – making it both repulsive and lethal.

Pioneered in the South and popularized by Food Network host Paula Deen, it was a big hit at this year’s Big E fair in Massachusetts. Fairgoers bought about 1,000 “Craz-E Burgers” each day of the fair’s 17-day run.

I’m not sure what concerns me most: the fact that people are living out their own personal Simpsons episodes, or the fact that there are now thousands of ticking time bombs walking around the streets of Massachusetts.

Please, Craz-E Burger: don’t cross over into Rhode Island. We have enough problems as it is.

*Which I’m sure will be expensive to treat, or may be regarded as a pre-existing condition, or some other such nonsense.

1 thought on “This Is How We Will Die”