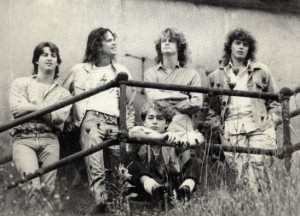 Since moving here fifteen years ago I’ve tried to uncover as much as I could about music and bands that were active in Rhode Island in the 80’s, stuff like Rash Of Stabbings and the Idle Rich, but until their new facebook page popped up recently I had never heard of That’ll Learn Ya, a group who met at URI and whose dark and dreamy music is as evocative and charming as the big bands of that era, like REM and early Miracle Legion. The 25 or so songs that they’ve put on their page, an assortment of studio tracks, live recordings and live on the radio stuff sound like a great shambolic blend of Nick Lowe and the Clash and one wonders what kept these guys from being our post-Talking Heads ambassadors to the rest of the world. Although the “official” reunion is next month, they’ll be playing a set this Saturday as part of the 75 Or Less label showcase that also includes local pop giants Minky Starshine, Makeup Breakup and the Inclined.