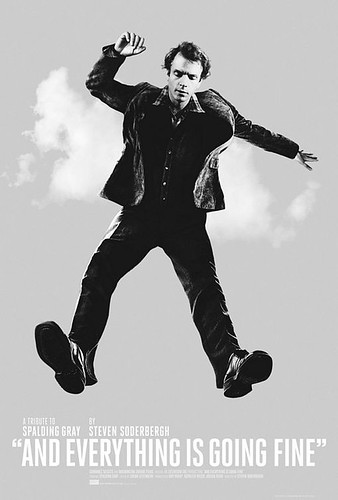 Steven Soderbergh’s “And Everything Is Going Fine”, a portrait of the unique talents of actor/playwright/personal monologist Spalding Gray, will open Friday, February 4th at the Cable Car. Praise from A. O. Scott writing for The New York Times,

The film, “And Everything Is Going Fine” (the highly ironic title comes from a monologue excerpted in the film), is, among other things, a tour de force of smart and sensitive editing. Drawing on recordings of stage appearances, television interviews with MTV and Charlie Rose, and other videotaped conversations, this documentary is as digressive and, miraculously, as coherent as the monologues that are its principal inspiration.

The film also covers Gray’s early life growing up and going to high school in Barrington. (Spalding Gray ended his own life in 2004 in New York City. He was the brother of Providence Journal arts and theater critic, Channing Gray.) This heads-up will give you time to rent Jonathan Demme’s 1987 performance film, “Swimming to Cambodia” wherein Spalding Gray, sitting at a table, renders a mesmerizing account of his experiences in southeast Asia filming “The Killing Fields” (which it is not necessary to have seen). I would insert “tour de force” somewhere in that sentence but it has already been used in regards to this new movie. Just see them both.