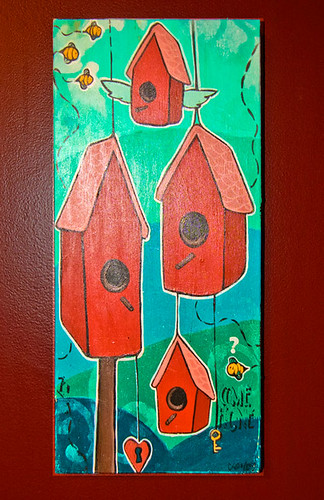 Rhode Island musician Chris Monti is busy as, well, a bee. In between state-wide solo gigs, local collaborations, and old-time-y tunes with The Yams at the Wintertime Farmer’s Market, he teams up with guitarist and keyboardist Jacob Haller and drummer Matt McLauren for two wildly different scenes: Americana/blues/rock band The Killdevils, who are about to embark on an East Coast tour, and high-energy reggae/Afro-pop collaboration the Double-Decker Dance Band, led by Liberian musician Joseph Paye.

Monti’s credits also include former membership of the marvelous ‘Mericans; opener for several Paul Geremia blues shows; and backup for Sierra Leone performer and activist Steady Bongo. In addition, he teaches guitar and banjo to adults and children and volunteers in hospitals, where his performances cheer up sick kids.

As if to personify the breadth of Monti’s varied musical interests, the other performers at the CD release party for his third album, Home, range from the Gypsy/acid folk/rock/trance/otherwise uncategorizable sounds of Alec K. Redfearn & the Eyesores to the rump-shakin’ music of the Double Decker Dance Band to the expert fiddling of Rachel Panitch and the Whatnots. Should be a heck of a show. More on the new album and this adorable but unrelated painting after the jump.


Home showcases Monti’s talents on songwriting as well as guitar. Some songs, like “Going Swimming,” are sweet and folksy, perfect for those bedridden kids, while others reveal his very adult wit. The spoken-word “Chicken Shack” is fast-paced and unexpectedly violent, while the clever sparring in “Darlene” brings to mind a hard-boiled detective attempting to get the upper hand of an obstinate femme fatale. Upbeat “The Eleven,” one of my favorites, is one of several songs on Home to feature unanticipated but delightful changes in tempo; another with a great change-up, “Violence,” also demonstrates Monti’s healthy set of lungs. Bluesy instrumentals flow between anthem-like songs, such as the introspective “Independence Day,” which I could almost picture Neil Young performing. Much of Home appears deeply personal, from chronicling Monti’s career as a singer and musician to acknowledging his roots and his father’s influence. His love of nature (Monti holds a biology degree from URI) is visible throughout, particularly in the buoyant “Honey Bee.” It’s notable that he recorded all dozen songs on Home with just himself, 6- and 12-string guitars, a rack harmonica and, in what Monti calls “one mercifully brief instance,” a kazoo–and yet it doesn’t lack the texture or sophistication of albums featuring multiple instruments and singers.

Pictured above: “Come Home” by local artist Jyll Ethier-Mullen from a 2009 Not About the Buildings art show. Monti’s cover and album art for “Home” includes various bees in homage to the song “Honey Bee,” and I couldn’t resist tying in the album with a bee-themed painting of a similar name.