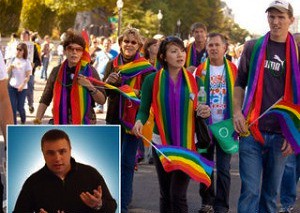 “I remember verbally asking myself, why am I here?” Thus began NOM member Louis Marinelli’s gradual but inexorable shift, from working against marriage equality through the nation’s highest-profile activist group, National Organization for Marriage (NOM) to abandoning that group to instead work for democratic equality. Specifically, it was during NOM’s “Summer for Marriage” summer tour last year, when he finally got to meet and speak to actual gay people, that he realized something wasn’t right.

Much of what he can tell us we already suspected, but the validation is gratifying: NOM is “just a small group of people, 20 or less,” mostly “fringe Catholics.” This much is easy to guess just from their rhetoric, with its powerful papist tone. (I attended a Catholic school for three years. It’s easy to spot, once you’re familiar with it. Of course, in heavily Catholic Rhode Island, it may be harder to distinguish from much of the background culture.)

What’s worth taking away in Marinelli’s account is that NOM is not a group that can be reasoned with: “They are doing this because they don’t recognize civil marriage as marriage, they recognize only the church sanctioned marriage.” Anyone who’s tried to talk to them already knows this, but this confirms what most of us suspected was the reason: NOM argues almost exclusively from an absolutist Catholic position, affording no room for the constitutional provisions most of us take for granted. This explains why they have no problem with arguing positions that seem irrational (and indeed often are) under U.S. law, and seem deaf to reasoned arguments of democratic fairness.

In the simplest terms: Don’t bother trying to argue with these people; they can’t and won’t hear you. In their view, the only valid argument is theirs, and any conflicting argument is by that inherently invalid. At the same time, it’s gratifying to hear that once in awhile, we do get through to them. I had previously argued that it’s pointless to confront them, but Marinelli’s story proves me wrong.

See y’all at this year’s picnic!

6 thoughts on “NOM Defector Speaks Out”