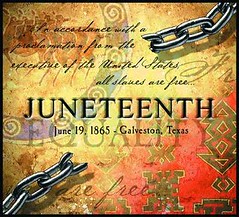 In other parts of the country this day is celebrated with festivals and outdoor events that all seem to involve food and music. I can find no such events locally this year — feel free to inform us. Meanwhile the history behind the holiday is explained at the Rhode Island College library site.

The Emancipation Proclamation was signed by President Abraham Lincoln on January 1, 1863, but it was not until June 19, 1865 that Union soldiers sailed into Galveston, Texas and Union Major General Gordon Granger read General Order No. 3 to the people of Galveston, announcing that all slaves in Texas were free.

Celebrations of June 19th or “Juneteenth” began in Texas in 1866 and spread to the neighboring states of Louisiana, Arkansas and Oklahoma, and to other states as African-American Texans migrated.

More info at Juneteenth.com a national registry of Juneteenth organizations and supporters.