Opting to spend the summer in a sweltering metal shop instead of relaxing at the beach, seven young adults committed a portion of their summer vacation to free speech in downtown Providence. While tolerance and freedom of expression are today considered to be basic human rights, Rhode Island’s long-standing tradition of acceptance goes back to the state founded over 300 years ago by Roger Williams. Now, some area youth are celebrating this legacy. 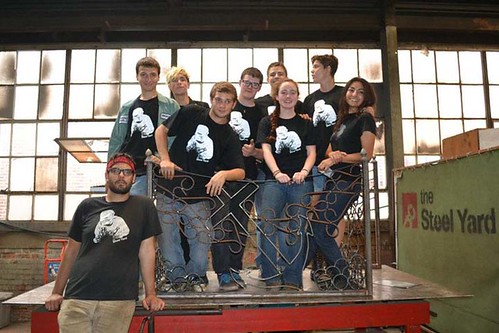 Participants enrolled in the Steel Yard’s fifth Camp Metalhead used their new metalworking skills to serve the community through public art. This year they honored Roger Williams’ ideals by fabricating a podium for the speaker’s corner at the Roger Williams National Memorial. Their design reflects the historic site’s landscape through trees, waves, and clouds; and it’s history through imagery of a crowd of people with uplifted faces encircling an anchor.

National Park Rangers were thrilled to have the opportunity to work with the young artists from Camp Metalhead. Jennifer Smith, Site Manager, was excited to collaborate with the campers to create podium that will expand the programming capabilities of the National Memorial. Smith went on to say that it’s intrinsic to the nature of the site to have a space where “visitors to the Memorial will be able to stand on the proverbial soapbox and exercise their first amendment rights.”

The podium for the speaker’s corner will be unveiled Friday, September 14th during a public ceremony beginning at 5:30pm at the Roger Williams National Memorial, located at 282 North Main Street in downtown Providence.

The Steel Yard is a 501 ( c ) 3 dedicated to the creative revitalization of Rhode Island’s communities through the cultivation of an environment of experimentation and a community strengthened by creative networks.