I will never ever see Gilbert & Sullivan’s operetta “The Mikado.” My reasons however have more to do with mental health than cultural politics, in that I once shared a small apartment with a man who was learning, and diligently rehearsing for, the lead role of Bunthorne in the G&S opera “Patience.” The relationship did not survive. I still have a visible tic.

But lately, productions of “The Mikado” have been garnering unwanted attention for both the casting of non-Asians and the play’s culturally offensive depictions of Japanese characters. The Atlantic reports on the recent flap in Seattle.

Decking out white actors in kimono kitsch to spoof British politics was considered witty in Victorian London. Critics in 2014 Seattle, however, have another word for it.

“It’s yellowface, in your face,” wrote The Seattle Times’ Sharon Pian Chan, referring to the Asian-stereotype variation of the “blackface” tradition where white actors dressed up as crude caricatures of African-Americans to raise laughs from other whites. Chan further condemns the production for its lack of any Asian-American performers.

Last week attendees to the three-day run of “The Mikado” — performed by Opera Providence at the Columbus Theatre — were greeted by the sidewalk protest seen here. The protest had been organized by Sakiko Mori and James McShane (he is of Taiwanese descent) who had become aware of the Seattle controversy. Ms. Mori has created an online petition asking the opera company to apologize for the racial stereotyping inherent in the production.

Mr. McShane (who is of Taiwanese descent) answered questions by email. I asked if any adjustments could be made to the production to make it acceptable, or if it should be retired altogether.

There have been newer productions of The Mikado that have approached this material thoughtfully. I am aware of a production that had Asian actors in the lead roles while wearing British costumes. There is also a film “The Mikado Project” by chil kong, that shows an Asian-American theatre company producing the opera. These are both great moves. I can support a production of this material that shows some consciousness of the present day, but not a straightforward, uncritical celebration of these 1800s racial stereotypes.

McShane added that relations between the opera company and the protesters became quite unpleasant. This was corroborated by Columbus Cooperative member Thomas Weyman who has lent his support to the petition.

I worked at the theatre bartending last weekend and was very
disappointed by the response that Opera Providence had to the
protesters. i understand the impulse to be defensive when confronted
by a sign and person denouncing the production you’ve spent a lot of
time and money on as racist and offensive… but the complete lack of
compassion and understanding for people who were personally hurt and
offended by The Mikado was appalling.

. . . adding that a line of the libretto had been altered as a threat to the sidewalk protesters. (No one from Opera Providence, has not returned an email request for comment.) Fans of the opera counter that the story is a lampoon of British politicans, but does that justify these ethnic parodies? Says McShane,

If this demeaning portrayal of Asians wasn’t bad enough, they are now saying that these infantilizing caricatures are merely incidental, and secondary to their purpose. Some audience members entering the theatre shouted to me, “it’s a fantasy!” The idea behind these protests is that other humans should be treated as real. The fantasy of these audience members is not one that I share.

In closing, a personal note: I am Caucasian, but my family is bi-racial. My antenna is up, if not exactly set to 11. (My niece was raised with a healthy contempt for the pious exactions of the liberal left.) The most important person in my world has an Asian face, and while I can’t address the specifics of this operatic fossil, I do know how the wretched awfulness of the Mr. Yunioshi scenes has made it impossible for me to watch “Breakfast at Tiffany’s.”

Mr. McShane made it clear, and sent along these pictures, that in this production at least, no actual yellowish or white pancake, or extreme makeup, was in evidence. But the opera remains problematic for reasons stated above. 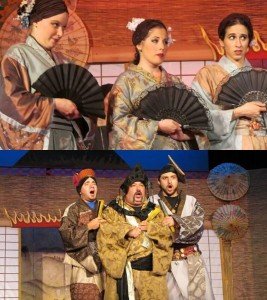