An urgent plea from the owners of the famous Wedding Cake on Broadway. After years of vacancy and deterioration, the iconic Kendrick-Prentice-Tirocchi House (1867) is in dire need of repair. Included on the Providence Preservation Society’s Most Endangered Properties list in 2010, 2012, and 2015, bringing this Providence landmark back to life requires creativity and resources. It is currently owned by ONE Neighborhood Builders (a merged organization of CommunityWorks and Olneyville Housing Corporation) and is for sale.

The Providence Revolving Fund has asked West Broadway Neighborhood Association and Providence Preservation Society to raise funds from the community to match a grant from the 1772 Foundation to stabilize the tower and make other emergency repairs. (Donate here.)

The importance of this structure in the history of our city and can not be overstated. Several years ago the RISD Museum held “From Paris to Providence: Fashion, Art, and the Tirocchi Dressmakers’ Shop 1915-1947” featuring the life’s work of the Tirocchi sisters, dressmakers to the wealthy and fashionable. The contents of the building became available upon the death of Laura Tirocchi Cella, when her son thought perhaps RISD might want to take a look. They were blown away. From the Providence Phoenix review in March of 2001.

The Victorian house at 514 Broadway in Providence is intriguingly ornate, but when RISD curators stepped into the place in 1989, they had no idea they were walking into a treasure trove. Opening rooms that had been closed for 42 years, they were suddenly like archaeologists who had stumbled into the tomb of Tutankhamen and its unexpected riches. Garments and opulent textiles from the first half of the century were preserved, a period of dress design as imaginative as the history of the time was tumultuous…

Many of the textiles on display, stretched out behind the mannequins, are beautiful enough to be framed on their own as art, from rich brocades to simple but lush silk-satin and chiffon. Similarly, sometimes the texture of the apparel is eye-catching enough to not need fancy detailing, as with a striking emerald green silk coat that simulates the curly texture of Persian lamb through intricate quilting.

This collection still exists. Would it be possible to revive maybe the fashion portion for a fundraiser? Do museums ever do that? 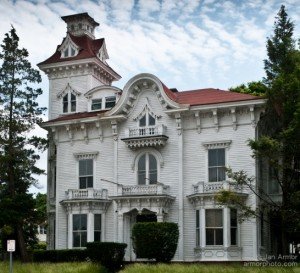