This new multi-media installation — “Why Would Anyone Invest In Providence?” — debuted Friday at Providence City Hall, complete with a Sia-inspired floor routine “Vinnie gets the Vapors.” If anyone has footage of parking lot titan Joseph Paolino performing CPR please send it along. (ProJo 11.19.15.)

But back to the wall art: See how the Egyptian motifs framing the new portrait echo the overweening Pharaonic ambition that led to the downfall of the painting’s subject; note in the portrait the ironic placement of the law books in the far background; see how the droopy waxiness of the face manifests the internal corruption. . .

Okay, so this might be more amusing if it was not so horrifying — one can only wish that this was a temporary exhibition. An inquiry downstairs in the mayor’s office brought an immediate . . . It’s in the city charter, there has to be an oil painting of every mayor. . . It’s in the charter! So they are proud as heck.

But here’s a question for Mayor Elorza, his COO Brett Smiley, and the entire City Council: The gallery of former mayors extends throughout the third floor hallway — much of it off to the side, in the shadows — so why has this odious, twice-convicted ex-con, who ran City Hall as an organized criminal enterprise, been given the best location in the building, in the exquisite Aldermen’s Chamber?

Here’s another question: Why was the previous watercolor portrait of the disgraced former mayor moved from inside the Aldermen’s Chamber to the wall of the alcove right outside the chamber? (See below.) The people in the mayor’s office assured me that this one was coming down now — then why has it clearly just been taken down and put right back up?

So here’s the message we currently send to the rest of the world: The people of Providence don’t just tolerate a tradition of political corruption, we honor it! We elevate it! And we celebrate it with not one, but two, portraits given pride of place above all other past mayors. (Mayor Reynold’s descendants should demand his portrait be removed from this corrupted triptych lest his reputation be tarnished by association.)

But perhaps nobody will find out about this. So far it’s only hit abcNews . . . and the AP wire service . . . and the Washington Times . . .

Frankly, at this point, I am extremely suspicious of anybody who would want to invest in this city. 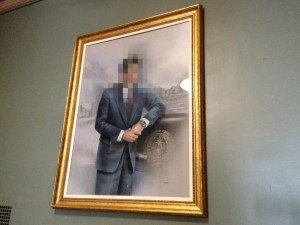