(2.18) New and Dangerous Opinions, the new permanent visitor center exhibit at the Roger Williams National memorial, is now open. To celebrate, a ribbon cutting and other events are scheduled for all day Saturday, starting in the morning at the Roger Williams National Memorial and then it’s up to the Old State House on Benefit Street in the afternoon. (Facebook event.)

The new exhibits are the first major change in the visitor center in twenty-four years. This provocative and interactive exhibit focuses on Roger Williams and the new and dangerous opinions that were the cause of his banishment from the Massachusetts Bay Colony in 1636. New and Dangerous Opinions illustrates how Williams’s words and beliefs are just as relevant in the country, and the world, today.

10:30am to 2:30pm: Talk to a ranger, an opportunity to discuss the themes and stories in the new exhibits.

Educating people on how revolutionary and unique a man Roger Williams was — in easily absorbed and inviting displays — was both a design and a writing challenge. So kudos to the designers, the Memorial staff, and the Park Service. They have done a great job with the concept and the execution.

The limited space has been creatively used — it’s brighter and more inviting than before. Alas, the weirdly appealing Roger Williams mannequin has been removed (it was time) but this has made room for easy viewing of the two wall exhibits, the child-friendly interactive display and trading chest, and benches for viewing the short Roger Williams movie. Seen here are mounted now-and-then displays showing how relevant Roger’s thinking is to modern problems. On the opposite “Lively Experiment” wall a graphic novel approach has been used to illuminate the complexities of assessing him from the Native American point of view. The exhibit does not shy away from the more troubling aspects of Roger’s life.

And bring money! The events are free of course, but the book store and gift shop are excellent. The books focus on the 17th century history and include John M. Barry’s fascinating “Roger Williams and the Creation of the American Soul” which I am just now reading. The first third of the book is devoted to Roger’s life in England where he had a front row seat to some of the most momentous events in British history. I had no idea. 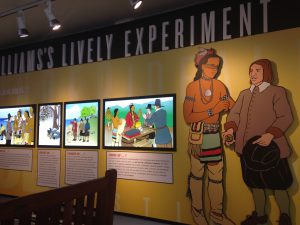