Total immersion. That is apparently the process for sculptor/artist Gage Prentiss as he works on the H.P. Lovecraft statue that will one day stand sentinel by the Providence River on Steeple Street. Images of Lovecraft are taped and pinned up on every surface . . . staring. This was not a man given to big beaming smiles. The impact upon entering is somewhat unnerving, but then you see the charming wax cat on the counter and the creepiness subsides. I recently visited Mr. Prentiss (also pretty charming) to get a progress report on the project and learn more about the artist. (And let’s not be coy; more money is needed. Donations can be made on this site.)

When finished, the life-sized statue with base will stand about 7 feet tall. In his left hand is a telescope, in his right hand a tentacle is spiraling out of an open book, all while three cats sit and lean naturally about the author’s feet. (Clearly the artist lives with cats.)

The proposed statue references Lovecraft’s dark fantasy (The Cats of Ulthar), and his cosmic horror (a book summoning madness and the alien unknown). In his left hand he holds a telescope pointing up and behind, symbolizing his inspiration from the infinite cosmos and the misty past.

The Lovecraft Providence Statue Project is being spearheaded by Niels Hobbs and Carmen Marusich, proprietors of the Lovecraft Arts & Sciences Council who, with Lovecraft fan Prentiss, felt the city needed to do more to celebrate the internationally renown father of weird fiction. Because Lovecraft didn’t just live here, he incorporated Providence extensively in his writings and identified himself as a son of Providence. The phrase “I Am Providence” is engraved on his headstone in Swan Point Cemetery.

Initially, Prentiss had created an 11″ concept maquette of the proposed statue which helped create interest at the 2015 NecronomiCon, but by last March this life-size wax statue, still not completed, was able to make the trip to ‘Cabinet of Curiosities’ a fundraiser held at the Providence Athenaeum. So where do things stand now with regards to finishing and funding the statue?

First, about $40,000 would get this wax statue out of Prentiss’s studio and into the foundry to be cast in bronze. This step is taking on some urgency with the arrival of the summer heat. The studio can not go above 77°. Gage found this out the hard way recently when he opened up one morning to find that the right hand and the book were now a congealing pile of mush on the floor. These parts had to be resculpted and he has since added black-out curtains to help keep the temperature down.

Prentiss has been working on this project for three years now, “I’ve devoted a quarter of my studio just to make this happen . . . it’s a labor of love.” In other words, he hasn’t gotten paid yet. Prentiss also does his painting and other sculpting commissions in this studio and Howard (as the artist affectionately/impatiently calls him) is taking up a lot of room. (Check out the Gage Prentiss website for his other work.) So not only does Prentiss have 98 pounds of microcrystalline wax tied up in this project, he’s paying to keep it air conditioned!

Just to be clear, Mr. Prentiss isn’t at all whiny about this. I’m being whiny on his behalf. Ultimately it is estimated that the entire project — sculpture, base, time capsule, casting, transportation, insurance, installation, air conditioning — may end up costing between $140,000 and $160,000.

(You may now be inspired to contribute to the effort. Donations can be made at this site. Or continue reading. What follows is the rest of our very enjoyable conversation, edited for clarity.)

BC: Are we thinking that NecronomiCon this summer will be a big boost for the project?

GP: Even though we were raising awareness for it last convention, all we had was a model. This is much better than a model. This is what was in my head when I was promoting the model but it was only a foot tall . . . But the big danger right now, the reason that tentacle-book is not in his hand, is that if it gets above 77° in here, then the wax begins to liquefy, and I came in one morning and the hand and book were on the floor congealing, and I had to resculpt it. I have to have the AC going just to keep it from turning into mush. In the winter he was sturdy enough that I actually brought him to the Athenaeum fundraiser so everyone could see him. And it was like driving a bomb through Providence because I was afraid he would shatter. So they want me to bring this to show at the convention but it’s just too hot. I would need an ice cream truck. And then it would melt when it got there, so it’s just not safe to do it.

BC: Has the city fixed on Steeple Street as the definite location?

GP: Yes, there’s a six-foot river stone circle right near the plinth where the tree is growing at the confluence of the rivers. Barnaby Evans suggested the spot when I met him at a fundraiser. We were shopping it around to the Observatory, to Roger Williams Park, all these different places. But Barnaby said, it has to be at the confluence where the two rivers meet, you have the old city on one side and the new city on the other, and with WaterFire it will look . . . magic. Barnaby was remarkably helpful in convincing the Mayor and other city boards that that was the spot for it. So that is where he’s going to end up when we cast him in bronze.

We will be starting a Kickstarter at the end of the summer after the convention, we’ll be using the convention to gain some momentum. We’re hopefully going to have Guillermo Del Toro, Kirk Hammett from Metallica, and other celebrity endorsements to go with the Kickstarter so it will be the Kickstarter, with the tweets, and social media all at the same time to get this thing going.

BC: You mention Guillermo del Toro — how did Lovecraft influence his work?

GP: It talks all about it in “Fear of the Unknown” the documentary. Ever since he was a child he read the stories and get influenced by the cosmic horror aspects. It fit with his sensibilities and storytelling and visuals, and the rich tapestry of imagination that you need to read Lovecraft is the same thing that Guillermo del Toro brings to his filmmaking and writing. Guillermo del Toro was instrumental in having the bronze bust of Lovecraft in the Athenaeum that exists now. He helped fund that — he’s right on top of the plaque.

There are a lot Lovecraft projects going on in the United States and abroad, but there’s only one Providence. So it’s very important that we bring him out in the light of the day — take everything that’s coming from — the good, the bad, the interesting, because he’s a global phenomenon.

BC: What about the telescope?

GP: That is a replica of the actual telescope that Lovecraft held. I had a friend Clarke Buchanan, a neighbor of my aunt’s on Cape Cod is a wood turner and I asked him if he would be interested in helping me wood-turn this from photographs, because I wouldn’t be able to sculpt it to that level of refinement myself. He said yes, and he did it as a donation. [Fun fact: Clarke Buchanan helped turn the fallen elm of the RIHS on Benefit Street into bowls.]

BC: So this wood piece becomes part of the final sculpture?

GP: The foundry is going to make a rubber mold and everything you see will be bronze. It doesn’t matter the material you send them — it’s all going to be cast anyway. All of it will be destroyed in the process — it’s gonna be gone.”

BC: So are you finished with this?

The reason why he’s on a base at all is because inside of that is going to be a time capsule that will have his complete annotated works, his definitive biography by S. T. Joshi, and letters from certain levels of donors saying why they think there should be a sculpture of Lovecraft in the future so that in a thousand years when scuba divers come and discover this, they can take the time capsule and know that he was a writer of fiction and not some wizard.

BC: Your surfaces have texture. You mentioned an artist who had influenced your style.

GP: One of my favorite sculptors is Alberto Giacometti. He did some great work but the thing I took away from him most is that people vibrate, and it’s very difficult to capture them realistically just by copying how light drapes on their form. You have to have texture, you have to have broken line, and asymmetrical elements and mistakes. Because whenever you look at a person, they are constantly changing — they flush, they move, they breath, they blink, they’re not static, they’re not like a photograph. So kind of fuzzing up their outline, giving them a little texture, makes them more realistic, let’s them breathe a bit . . . in my philosophy.

Tools of the sculpting trade. 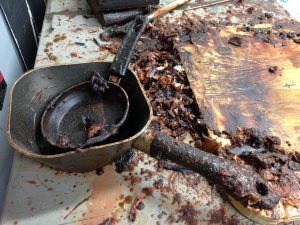 The Steeple Street site is only perfect. 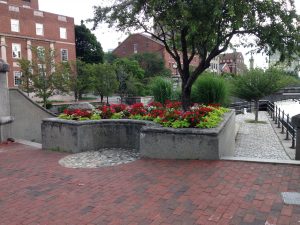 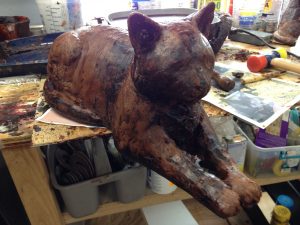