An art installation of sorts has emerged on the side of an old mill building on the north side of Harris Avenue. Public art is not so unusual around our “creative capital” but this particular array had a spontaneous quality to it that made me wonder whether it was even a sanctioned effort. It appeared to be the work of one person. But who?

As luck would have it, I recently had an opportunity to find out. A bit further up the street, in this same building, is a hive of artists’ work spaces where building manager, Tom Cunningham, recently threw an open house. (Great fun, fascinating people, exceptional art.) When asked about the exterior artwork, Mr. Cunningham enthused about its creator, Carl Dimitri, and insisted that I meet with him. So, yes, the work was sanctioned.

I recently met with Dimitri in front of the building to discuss this project, and although he has a studio within the building, the exterior seems to have a strong claim on his attention. The side visible along Harris Avenue is only a part of what he has covered. (This section of the building had suffered fire damage and has been boarded up. It is unoccupied.) Dimitri gave me a tour around the exterior of this former mill building, a glorious, crumbling old pile. Dimitri has been treating all surfaces — walls, doors, pillars, loading docks — as a potential canvas, his inspirations ranging from New York City, maps of Palestine, Goya, and Warhol. The artist’s dismay at current events is often evident.

Dimitri is a Rhode Island native, living in the Providence area for most of his 40 years, and largely self-taught. Below are excerpts from our conversation which came to an abrupt end when the sky opened up. I first wanted to know how long he had been working on the Harris Avenue side.

CD: It took about six months to piece it together.

BC: Did you piece it together in your head first? Or did you just come out here and start working?

CD: A little bit of both. Sometimes I would think about what I wanted to do. I would come out here, sit on the sidewalk, and look at the building. I started putting up a few pieces, then did some painting, and then I would just add onto it. I would kind of keep Sunday mornings free for that, because there is less traffic at that time.

BC: Did you paint directly on the building or paint them inside then attach them?

CD: It’s a combination of both . . . some bits of collage . . . lots of layers. Even some people came by and added some of their own stuff. I was kind of grateful for the contribution actually. I was happy when some people came down here and added the purple. I was “Okay, that was good.”

BC: From beginning to end how long did it take?

CD: It took about six months from last spring to last fall.

BC: Is there a theme or overarching statement being made here, or do you leave it to the individual viewers?

CD: I think it’s open to what people want to interpret. I had a woman come by and she was giving me a hard time — You have some mean-looking faces here. You should make happy faces. — I kind of understood what she was saying. She didn’t want any negativity on the street.

BC: What is the source of this quote here about humanity undergoing a transformation of consciousness?

CD: That’s a quote from Pierre Teilhard de Chardin, a Jesuit mystic about the growing evolution of consciousness . . . the coming of mass enlightenment.

CD: He would probably say that what is happening right now is a last gasp of darkness . . . Trump, Bannon, the whole crew . . . going down the drain.

BC: What is going on over at the right side of the wall? You seem to have specific people here.

CD: There are a lot of women over here . . .  more of the idea of The Feminine Divine. These are some angels, so we are coming out of the darkness, and again, the quote about the evolution of consciousness, towards enlightenment. So evolution would angle toward the female.

BC: Was it you who made that angel that was hanging off the wall last year?

BC: That’s the first time I stopped my car to take a picture. It was beautiful. Now I know who made it. What’s going on up there? Is that the Guggenheim? Is this meant to be New York City?

CD: It is the Guggenheim. It’s layers of a flooded city and then the Guggenheim. New York City . . . with bridges and subways. Kind of like chaos, climate change, but the Guggenheim is up there at the top. I just love that building.

BC: So from left to right we have — out of the chaos, out of the darkness, and into the light.

BC: And over here, what is this where it says “Rabbit”?

CD: Oh that’s just a rabbit. I have a friend named Rabbit. 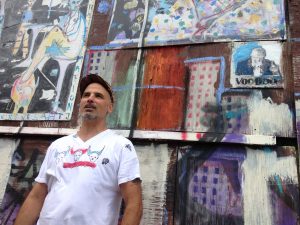 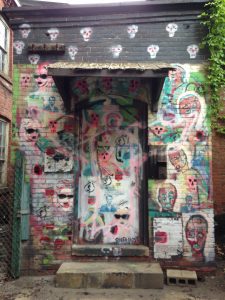 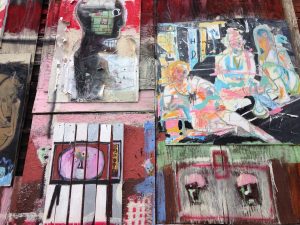