For someone who spent three years looking for Stephen Hopkins’ grave, this is excellent news. The first of six signs aimed at educating and assisting visitors to the North Burial Ground (NBG) was unveiled Saturday. This first sign, with text and map, is located next to the marble steps entrance across from the National Guard Armory on North Main Street (seen here in the background).

The text of these signs — a collaboration of Professor Erik Christiansen and last year’s honors seminar at Rhode Island College (RIC), the North Burial Ground Project at Rhode Island College, the Friends of North Burial Ground, and the Providence Parks Department — will cover the natural environment, an area known as Free Ground, the Potter’s Field, and more. (Go here for a video of  Prof. Christiansen at the dedication ceremony.)

On June 10, 1700 the Providence Town Meeting designated 43/45 acres of land located in the northerly section of town for militia training and ten acres in the southern portion of the parcel, situated between present day North Main Street and Branch Avenue, for a town burial ground. The first interment occurred in 1711 with the burial of prominent resident Samuel Whipple .

Things got real interesting in 1800s.

The nineteenth century proved to be a time of both growth and setbacks for the NBG. In the 1810s, grave desecration became an alarming civic problem. Throughout the state, various medical students and doctors allegedly unearthed fresh graves in order to use the corpses for medical experiments. In 1817, the General Assembly passed a detailed decree to preserve and protect the burial ground from desecraters. 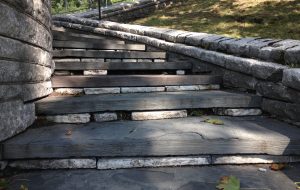 Yankee frugality at work . . . nothing goes to waste.