Following the dedication ceremony last October, the representative from the Department of Public Works offered the old sign to Ray Rickman, director of Stages of Freedom and the man who spearheaded the renaming effort. Ever the historian, Rickman grabbed the sign for posterity’s sake. Rickman informs us that Bannister Street is the only Providence street name honoring African-Americans.

Rickman wrote a great piece in support of this initiative for the Providence Journal, “Honor those who are worthy of a city street name.” The biography of nationally recognized 19th-century landscape painter Edward Bannister is remarkable enough, but the achievements of his wife Christiana were astounding given the times. (We wrote up the initial campaign in October 2017.) 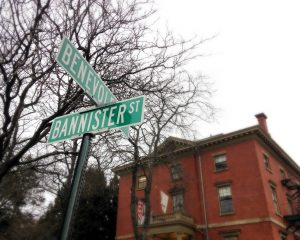 The Bannisters are buried in the North Burial Ground.