“I’m not crying because I’m on my period, or anything. I can’t believe a film about menstruation just won an Oscar!” So stated Rayka Zehtabchi, director of “Period. End of Sentence,” upon winning the Academy Award for Best Short Documentary.

And congratulations to Brown freshman Charlotte Silverman who helped spearhead the project and the film. From the ProJo coverage of Oscar night:

Students wanting to make a positive change in the world partnered with Girls Learn International to send a menstrual-pad-making machine to the village of their sister school in India. Seeking a way to tell others about how girls drop out of school if they have no access to sanitary products, the students raised $45,000 on Kickstarter to buy and ship the machine, which creates a micro-economy run by women, as well as all the materials it will need for a year, and to hire a director and film crew and send them to India. The result was the short documentary that won an Oscar Sunday night.

I was impressed enough that a college freshman was changing the world, and winning an Oscar, but The Pad Project was initiated when Ms. Silverman was in high school!

But when a sanitary pad machine is installed in the village, the women learn to manufacture and market their own pads, empowering the women of their community. They name their brand “FLY,” because they want women “to soar.” Their flight is, in part, enabled by the work of high school girls half a world away, in California, who raised the initial money for the machine and began a non-profit called “The Pad Project.”

I wonder how long it took for Brown admissions to put her application in the ‘yes’ pile.

The movie runs 26 minutes and is available on Netflix.

So what is being done locally where access to sanitary products can also be a problem? Mayor Elorza has just announced a pilot program for designated bathrooms at Hope High School, Classical High School, Delsesto Middle School, and Greene Middle School.

Timed dispensers carrying the free period products have been installed in every female bathroom and in the school’s gender-neutral bathroom at Hope High School and DelSesto Middle School. In an effort to experiment with different delivery options, timed dispensers were installed in one designated female bathroom and one gender-neutral bathroom at both Classical High School and Greene Middle School for the program’s pilot trial.

These products are not cheap, and the cost falls entirely on female students. Let’s give the Mayor the final word.

“No student should have to limit their education or miss school activities because they are menstruating,” said Mayor Jorge Elorza. “Periods are a part of life. When students are forced to disrupt their regular activity, they miss opportunities, it affects their self-esteem, and it reinforces stigma. Let’s work to ensure that all students in our school system are empowered, fully engaged, and focused on achieving in the classroom by meeting their basic needs.”

(Photos taken at the Avon Cinema where the dispenser predates 1963 when zip codes came into use. The Avon is a time machine.) 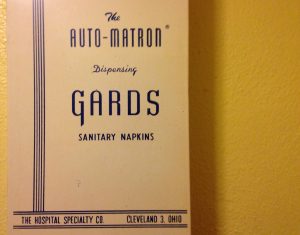