The former textile mill on the Blackstone River in Pawtucket was a blur of activity yesterday as Cathy Plourde and Kara Larson, partners in business and life, prepared for the soft opening of their new venture Rhode Island Spirits this weekend. Cathy was working like a woman possessed at the bottling machine — seen here are bottles of the new Rhodium Vodka heading for the label table — while Kara managed a crew putting the final touches on the bar and tasting room. She showed me around and answered a few questions.

The space is open and light, with couches, tables and chairs, and larger communal tables. Small tables line the row of windows along the river side. (The river is right there. . . . good views of the spring flood.) A little over half of the 3300-square-feet area is used for the tasting room where much of the wood being used is salvage from the building. The bar front features nicely-worn, beadboard wainscoting, while some of the tables are wood reclaimed from roofing within the mill. The floors are the original concrete. Kara pointed out where the word “Kluge” marked the location of an old stamping machine,

We will over time probably do something more interesting, but you can tell  . . . the machine was there. But it’s been a textile mill for most of its life. When we took this space part of it was unoccupied and part of it had a printing company which has now moved next door. You can hear the presses thumping away.

What can visitors expect this weekend? The Rhodium gin and vodka lines will be making their debut — straight up, or in cocktails — and snacks will be on hand, as well as swell baseball caps, T-shirts, and bags. But why the soft opening?

The only reason we’re not calling this weekend a ‘grand opening’ is because a lot of our formulas and label approvals are still stuck in the federal backlog. So the only thing that we have right now is our flagship vodka and our flagship gin, which are both excellent and we can do lots of fun things with them.

Side bar: The ‘Rhodium’ appellation is so perfect it needs no explanation, but of course, as a former science teacher, I had to check the periodic table. The element Rhodium is a rare, silvery-white noble metal, whose atomic number happens to be . . . 45! But what better way to purify the legacy of that tainted number than with alcohol. In the years to come, we can reclaim that number.

Kara was asked about their focus on the white spirits and developing the brand’s identity in the spirits market.

We’re starting with the gin and the vodka because that’s what we’re really interested in, that by using using fresh regional botanicals we can really add something that’s not being done alredy in the market. So that’s where we want to develop our expertise using lots of local flavorings, and we work with farmers to get fresh ingredients, herbs, and fruits, and things that then go into the still and flavor especially the gin. But even the apples, vodka gets pre-distilled with apples from Barton Farms.

The line will be expanding fairly rapidly over the next six months with two more gins and a vodka in the works, plus a Limoncello that is almost ready to go. Kara’s thoughts as she looked around the space,

We really wanted to have sort of a big comfortable space that people would want to spend some time in, bring their friends, we are aiming for a space where if you want to get together with folks for an anniversary, or go get something after work . . . this will be a space that is welcoming for everybody.

The new distillery is off Exchange Street and behind Mad Dog Studios. Signs that will guide visitors to the entrance and parking were being prepped as I left.

Paul Parker wrote up the venture last November in the ProJo. 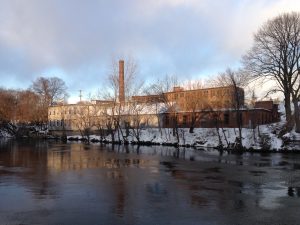 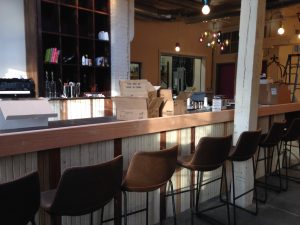 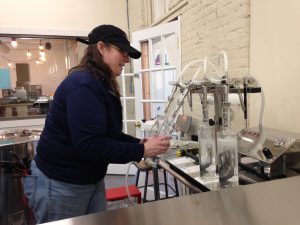 Ms. Plourde was literally a blur in every photo.