Waiting. Watching. This statue of H.P. Lovecraft is part of Ars Necronomica: Dark Dreams in the Divine City, a new exhibit at the Providence Art Club opening Tuesday (you can go see the statue now). This show ties in with the upcoming Lovecraftian literature convention, Necronomicon Providence, to be held later in the month. (We’ll write that up closer to the date, but go get your tickets now.)

The newest incarnation of the Ars Necronomica exhibit reveals a tantalizing glimpse of upcoming creative talent, as well as rarely seen works by many established artists. Their work rises in unison in an array of phantasmagorical splendor to mirror and expand upon the already fantastic spires of Providence’s own skyline.

The statue is the work of local artist Gage Prentiss who we first interviewed in 2017 as he was sculpting and fabricating the work, with an update last year. He has four pieces in the show and had just installed the statue yesterday in the alcove between the Art Club and the Dodge House Gallery, and we met there this morning. The sculpture, which is life-sized, will remain in its current location throughout the exhibit. Let the selfies begin.

Mr. Prentiss will be a panelist (The Weird Made Art, on Friday) and a vendor during Necronomicon Providence, to be held from August 22-25 in venues about town. The vendor hall, dubbed the Grand Emporium of Weird, is a standalone show at the Omni Hotel. His work includes gold plated bronze jewelry, a gorgeous Devil’s Reef Tiara, evil poppets, a ceremonial punch dagger fabricated from a mold of a megalodon tooth, and a few busts of Lovecraft himself.

And yes, I know about the controversy regarding Lovecraft’s racist and anti-Semitic attitudes. Everyone knows by now. And the folks behind Necronomicon have never shied away from the issue, having held panel discussions on the topic at the convention. We all struggle with the problem of separating talented but blameworthy artists from their work. And while Lovecraft’s influence on the world of literature, art, and movies — Guillermo del Toro and Stephen King are among his fans — can not be overstated, his political influence in the real world was likely nil.

Prentiss has obviously had to think about this a lot and it did come up this morning over coffee and cocoa. He directed me to a recent column by Ray Rickman, former state representative and cofounder of Stages of Freedom: “Be honest about Lovecraft’s racism.”

I have no problem with honoring his place in American letters. I only ask that people learn the truth, instead of a sanitized history that ignores his racial shortcomings.

Mr. Rickman will be giving a talk on the Friday of Necronomicon.

Exhibition runs from Tuesday, August 13, through August 31. August Gallery Hours: Monday-Friday, noon to 3pm. Closed Weekends during the month of August, but will be open to conference goers the weekend of the conference.

You can donate to the statue project. There will be costs associated with the statue’s eventual installation including to informational plaques. 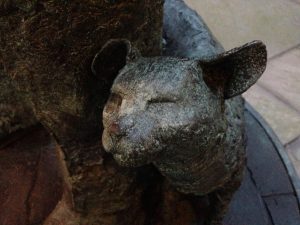 Prentiss explains, “[Lovecraft] thought cats were the most perfect creatures in the world. He loved them more than anything. If a cat sat on him at a friend’s house he wouldn’t move.” (The cats also reference Lovecraft’s work of weird fantasy,“The Cats of Ulthar.”)

Sculptor Gage Prentiss also enjoys having cats on his lap. 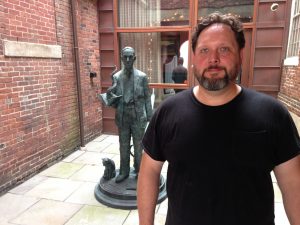 The view from Thomas Street . . . could become selfie central. The statue is true to scale. 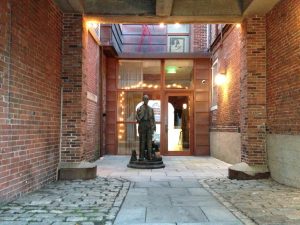