After 8 months of extensive remodeling AS220 Food & Drink is open for business again and the new interior is dazzling. Food service will now be available Tuesday through Saturday. Profits from Food & Drink support the organization’s not-for-profit work. Here’s what’s been going on:

. . . we gutted and remodeled the old bar and restaurant; opened up a wall allowing patrons to move freely from the restaurant and our Black Box Theatre; built a new addition to house a new kitchen; added a gender-neutral bathroom; re-opened the bar portion of this operation back in May, and now we can check “re-open restaurant” off our list! The campaign isn’t over yet, though – we’re installing an elevator, adding a storefront window gallery to the front of our Black Box, and much more.

Work is ongoing. You can help with the improvements to the flagship Empire Street Complex with a contribution to the AS220 All Access Campaign. 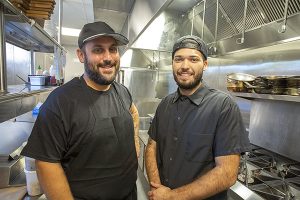