Specifically, the Aldermen Chambers in Providence City Hall with its undisputed primo portrait real estate. Why has pride of place been given to the image of a corrupt, twice-convicted felon, who spent over four years in federal prison? This portrait should have been relocated years ago. Now we have Sheila Bentley, Buddy Cianci’s ex-wife, sharing her account of decades of physical and psychological abuse at his hands, and the presence of this portrait has become completely unacceptable.

In a piece that, while it came as no surprise, is still frequently shocking, Boston Globe staff writer Amanda Milkovits was able to get Ms. Bentley to open up: “For decades, Buddy Cianci’s ex-wife stayed silent about their marriage. Now she’s speaking out” (Boston Globe 10.20.19).

The love died early in their volatile marriage. What remained, up until Cianci’s death in 2016, was fear.

She remembered the night a friend and a local doctor helped conceal a bruise from when Cianci hit her face, so it wouldn’t be noticeable during the swearing-in for his second term.

Last month, Bentley appeared in a 12-minute interview on the WGBH ‘Greater Boston’ show with Milkovits and actor Rebecca Gibel, who portrayed Bentley in the recent Trinity production “The Prince of Providence.” I appreciated the moderator’s comments on how those “lovable rogue” monikers should be retired; Cianci was a violent, foul-mouthed goon. (Gibel actually shares an anecdote of her own skeevy Cianci groping, which happened within about one minute of their being introduced.)

At any rate, I am not advocating for the rewriting of history, but each of our many former mayors has a portrait and they are spread all around City Hall. And this brings me to the appallingly shabby treatment of my hero, Mayor Daniel L.D. Granger (1901-1903)!

Not only was this avatar of the Democrat Good Government party never convicted of a single crime, but just look at what he accomplished in those two years: built a new Central Fire Station, improved the city’s sewage system, buried the high tension wires in downtown, expanded Blackstone Park, and under his watch the “beautiful Bajnotti Fountain became the centerpiece of Burnside Park.” He went on to represent us honorably in Congress. And yet they have him stuck behind the recycling bins and evacuation chair!

I say we swap these two portraits, have a glorious ceremony declaring it Daniel Granger Day, and make a statement to the world that character and honest government matter in the City of Providence. 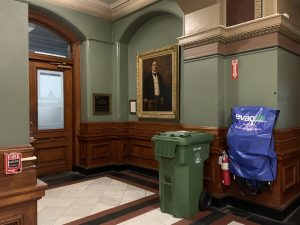