A new mural in honor of Mary C. Wheeler, artist and founder of the Wheeler School, was dedicated yesterday on Fones Alley off of Thayer Street. Wheeler spent many years studying and painting in France, establishing a particular connection to Claude Monet.

The head of Wheeler’s Visual Arts Department, Bob Martin, attended the ribbon-cutting explaining, “The last six years of Miss Wheeler’s annual trips to France were spent in Giverny where she leased a house and gardens next door to Claude Monet.”

Seen here, an attendee was either taking a selfie off a mirrored area in the mural, or connecting with the embedded QR code which leads to the actual film of Monet working on the same scene! Very cool.

Next May, the artistic legacy of Mary Colman Wheeler will be celebrated with an exhibit at the Providence Art Club where she was a longtime member. It will mark a memorial exhibit held there 100 years ago at the time of her death. She was a fascinating, independent woman and ahead of her time. We will have more to write next year.

The mural has been created by students, alumni, and the Wheeler Visual Arts Department faculty as the second mural in a new Thayer Street Public Art Project. They call themselves the Mary C. Mural Crew and have titled the mural: “Mary Wheeler’s neighbor painting in his garden.”  The first mural they executed is that coyote up on Meeting Street across from Blue State Coffee. You know . . . the one you can never take a picture of because the damn cars are always in the way. 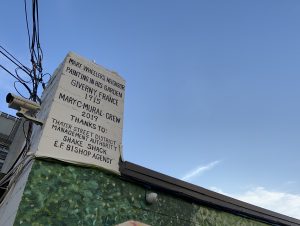 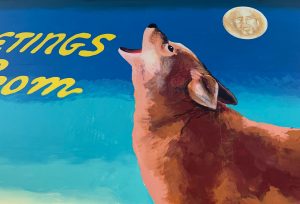