The most difficult entries in the Providence Preservation Society’s Most Endangered Properties list usually suffer from one of two problems: bad location, unwieldy size (and sometimes both — the Broad Street Synagogue comes to mind).

But neither problem afflicts the former State Board of Public Roads Building (1931) on Arline Street. This neighborhood is coming around. One of the coolest retail/performance spots in town, POP Emporium, is but a few blocks away, as is the Woonasquatucket River Greenway, downtown, the State House, access to the highway, and, for what it’s worth, the Blood Center. You never know.

The building itself could be adapted for any number of uses: business, retail, lofts, mixed-use. There is plenty of room for parking next to the building and on the street.

Five years have passed since this industrial Art Deco gem of Smith Hill was last listed, and sadly not much has changed except for the effects of a robust graffiti campaign.

Originally the State Board of Public Roads Maintenance Building, the concrete and brick, 2-story structure is a notable example of the machine aesthetic and was one of the first modernist buildings erected by the State of Rhode Island in the early 1930s.

And it has such great bones. Why has this not been snatched up?

One success story is right around the corner on Smith Street where a former entry on the Most Endangered Properties List is getting rehabbed. 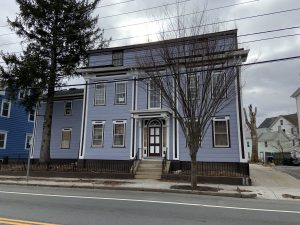 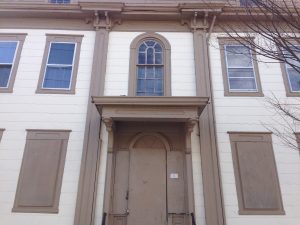