Last month we highlighted the 1931 State Board of Public Roads building on Arline Street, but this year’s Most Endangered Properties List from the Providence Preservation Society also includes some less conventional entries: the Axelrod music sign, and the property pictured here, the iconic Crook Point Bascule Bridge which RIDOT has slated for demolition.

Word of the bridge’s demise was illuminated in the release last year of the state’s 10-year transportation plan, which scheduled demolition for 2026-27. RIDOT cited safety and liability as reasons, and earmarked $6 million for the removal. Mayor Jorge Elorza spoke out in favor of the bridge’s preservation last July when the plan was revealed, and the City has since convened advocates to explore viable re-use options.

The Preservation Society asks us to think outside the box.

Loss of the bridge would unlink us from Providence’s rail history as well as the East Side Tunnel. . . . Can this bridge be preserved as an artistic and/or recreational landmark? PPS urges the City and State to give thoughtful consideration to all options.

Go take a walk: The 1908 Crook Point Bascule can be viewed from the section of the bike path easily accessed from behind East Side Marketplace on Pitman Street. There is also access at the end of Power Street and on Gano Street at Trenton.

The adjacent landscaping is being improved. They have been doing an excellent job on this with naturalistic plantings of durable, native plants. 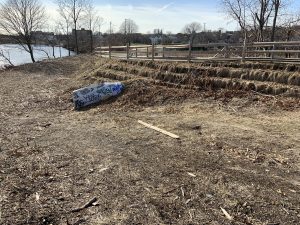