BYOB of course. Of the many, very worthy, 401 promotions, this one caught our eye. Tune in this afternoon at 5pm when Narragansett Beer owner, Mark Hellendrung, gives a virtual tour of the upcoming brewery at 271 Tockwotton Street, live-streamed at Facebook. From the people at Gansett:

Mark will be live to show viewers a tour of the new Tockwotton brewery location. There is much construction going on, but he will likely be showcasing the view, the current state of the inside and out and be answering any questions that viewers may comment. Overall will be a much needed break and hope it brings a little excitement to all the ‘Gansett fans quarantining right now.

We wrote up the new project last August in ‘Microbrewery Coming to India Point’ with extensive history of the street and the meaning of “Tockwotton.”

The mock-up for the brewery on the Gansett site looks very McDonalds-y. Lets hope that in no way reflects the aesthetic decisions actually being made because this building is loaded with charm as is (love those windows). Today we can get a better idea of what they are doing.

The featured photo was taken from the Linear Park on Washington Bridge. Below is a detail form the original entrance. On either side of the arch are the faint numbers ‘271’ which I love. I don’t know how they will be handled in a renovation — let’s ask Mark today. 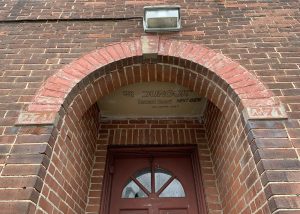 [Update: This place is huge! (They have the video up on their Facebook page.) The production values (audio) are not always great but I liked that he started out up on the bridge so people can see where the place is located. They hope to open the beer garden part in July. There will be big doors out the back that open to world onto a deck. They want to have live music! Nice to think about having fun again. BC]