A thoughtful piece in today’s ProJo, “Nativist son: H.P. Lovecraft, race, and a statue,” revives the thorny problem of what to do with a life-size bronze statue of H.P. Lovecraft, the work of local sculptor Gage Prentiss. Author David J. Goodwin, who is working on a book about Lovecraft, does not suggest a solution, and neither can I. But perhaps by getting the word out, a light will go on in some reader’s head. Basically, the statue needs to find a site somewhere here in Providence, on privately owned property. It is a great sculpture, and with the proper context it could be a celebration of the author’s work while simultaneously educating the public on the flawed man who created it.

Goodwin reached out to Niels-Viggo Hobbs, founder of the Lovecraft Arts & Sciences Council and organizer of the biennial NecronomiCon, and artist Mr. Prentiss for comment.

Niels-Viggo Hobbs, the executive director of the Lovecraft Arts & Sciences Council, believes that “there is a place for a Lovecraft statue that more venerates his creations than it does him as a deeply flawed person.” Hobbs lists a small sample of creatives — “Jorge Luis Borges, Junji Ito, Guillermo del Toro, H.R. Giger, Stephen King” — shaped by Lovecraft as evidence of his artistic importance.

Prentiss describes how Lovecraft’s fiction continues to create a far-flung and diverse network of fans. “His work has formed a positive and close community of people from all genders, races, ages, nationalities and creeds.” Both Hobbs and Prentiss emphasize Lovecraft’s central place in Providence’s cultural history. People visit Providence because of its association with Lovecraft, and tourists regularly contact Prentiss to see his statue.

I interviewed Prentiss in 2017 while he was still working on the piece and then again when it made its debut on Thomas Street at the Providence Art Club in 2019. (This photo was taken from inside the niche looking across the street to the First Baptist Meetinghouse.) The statue remained in place for the duration of the show. It now stands in Mr. Prentiss’s yard.

It was no secret, and has never been downplayed*, that Lovecraft had expressed terrible sentiments about Jews and minorities in his personal correspondence, but a group of local and devoted fans felt that his literary works were so widely read and influential, and his identification with the city of Providence so specific — the inscription on his gravestone famously reads “I am Providence” — that the city should be making more of this literary icon, creator of the “weird fiction” genre. What followed was Hobbs’s bookstore/academic Lovecraft hub, the popular NecronomiCon conventions, and plans for the statue.

To say that the political landscape has evolved since the start of this project in 2015 would be an understatement. But one thing I know personally is that Prentiss and Hobbs are compassionate, open-minded, decent people who share none of Lovecraft’s detestable sentiments.

Last August the Providence Art Club held a Lovecraft inspired art show. At that time I once again touched base with Prentiss to discuss Lovecraft, and the subject of the author’s racist views came up.

Prentiss has obviously had to think about this a lot and it did come up this morning over coffee and cocoa. He directed me to a recent column by Ray Rickman, former state representative and cofounder of Stages of Freedom: “Be honest about Lovecraft’s racism.”

Mr. Rickman, who was giving a talk at last summer’s NecronomiCon, had this to say:

I have no problem with honoring his place in American letters. I only ask that people learn the truth, instead of a sanitized history that ignores his racial shortcomings.

As to statues, Mr. Goodwin points out that there is a categorical difference between people in the arts and Civil War generals.

We commemorate creative figures — our artists, writers, and musicians — for their work, not their deeds or belief systems. Likewise, creatives seldom carry power or influence over the events of their day. These are crucial differences between an H.P. Lovecraft and a Robert E. Lee.

So, if anyone reading this has a suggestion for where to put this wonderful piece of art, let us know.

* I know that a panel addressed the topic in the first NecronomiCon.

Below: Artist Gage Prentiss stands with his statue. 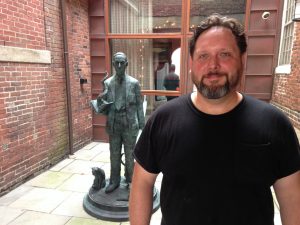 1 thought on “The Lovecraft Statue Needs A Home”