Artist Gage Prentiss has done it again. A stunning bust of noted Black landscape painter, one of the founding members of the Providence Art Club, Edward M. Bannister, now casts a gimlet eye on the gallery below, sizing it up. Meticulously researched and executed — and loaded with personality and confidence — this face just draws you in. Back in 1880 a group of professional artists founded the Providence Art Club, a group that included a few women as well as Bannister. Born in Canada, he eventually found his way to Providence. From The Smithsonian:

Edward Mitchell Bannister’s determination to become a successful artist was largely fueled by an inflammatory article he read in the New York Herald in 1867, that stated ​“the Negro seems to have an appreciation for art while being manifestly unable to produce it.” Ironically, less than a decade later, in 1876, Bannister was the first African-American artist to receive a national award [first prize at the Philadelphia Centennial Exposition].

Now his bust holds pride of place on the second floor gallery of the Clubhouse. One member commented on Bannister’s “return” to the club: “Of all past club members, Bannister undoubtedly achieved more national recognition than any of the other artist members.” Moved by the power of the piece he added: “He’s there . . . the tilt to his head . . . a swagger.”

Artist Gage Prentiss answered a few questions for The Dose via email. It has been edited for space and clarity.

PDD: Can you describe your process? What source material was there for the image of Bannister?

GP: When putting together his likeness, I had 4 images. I found 2 on a google search. They were basically the same, staged 3/4 angle from the left and right. I’m guessing years apart, by hairline. They worked perfectly well for understanding his features, though without a straight-on image, I couldn’t really pull out the calipers to get good measurements for building his anatomy in the round.

The 3rd image was the most exciting to me. It was blurred and grainy, but showed him standing casually with his pipe, probably at the Art Club, probably unaware. His hair was natural, his gesture was relaxed, and I started to see a glimpse of the person that I couldn’t see in the staged portraits. The image came from a Bannister show booklet from the Kenkeleba House in New York City, 1992.

PDD: There is, of course, the Art Club’s array of artists’ silhouettes on the walls.

GP: The 4th image was really cool, because it was his shadow silhouette, reproduced on the Art Club wall. Surely it was a bit stylized, but it came directly from him, and gave me the confidence of a profile to work from.

Because nobody alive knows what Bannister looked like from any other angle than a 3/4 view, I felt his presence was more important that a perfect likeness. To get a feeling for his presence, I spent a lot of time looking at his paintings online, and was able to see the real thing at the Gilbert Stuart Museum. In my search for images I met Diane Heller, an artist working on a documentary about Bannister. She gave me details about who he was, how he worked, and what his contemporaries thought of him. Putting all those facets together, I came away with the feeling of a strong, spiritual and fearless man of vision, grace and charisma.

PDD: How else were you able to arrive at this rendering?

GP: To get his likeness, I cobbled together the average skull dimensions of an African American male, with photos and measurements from a live model who I felt shared a similar presence and physicality to Bannister. Then there was a lot of squatting and looking at the 3/4 view. If I could capture that, and grab some facial symmetry, I should have been able to achieve something close to his likeness.
PPD: Were there any surprises during the process?
GP: I was surprised at how deeply I felt for Bannister by the end. I discovered him when I was designing a bus shelter for the city, and wanted to use his wife Christiana Carteaux Bannister for one of the panels. I knew he was the only Black founding member of the PAC, and that he was a landscape painter, but I had not dug any deeper. The more time I spent with his paintings, the more I began to feel him. He liked to be out in creation, painting nature, and working to capture the awe and wonder of it, the deity of it.  His art has a feeling of expectation, light, gravity, and grace. He touched me through his work. I really wanted to honor him. I wanted to catch a bit of his presence to share with the present and future. I want people to see him, and be curious to discover why he was memorialized.
PDD: Final thoughts?
GP: When I delivered him to the Art Club, I got chills, because I realized that was the first time he would cast a shadow there since he had passed.

Further recognition came last year when Magee Street was renamed Bannister Street in a long overdue acknowledgement of this man’s place in Providence history. (Magee was a slave trader.)

The painting in the background is ‘Cairo Airport’ by another local artist, Morris Nathanson.

The Providence Art Club is currently running its ‘Little Pictures Art Sale’ and will be open to the public, seven days, noon to 5pm, through December 23rd. 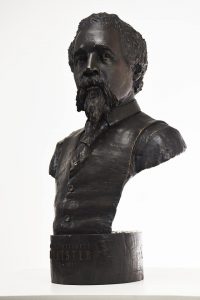