What a great idea. Gail Ciampa has taken over the ProJo food section today for multiple trips down memory lane, including a straight-up timeline of Rhode Island’s most beloved restaurants, bars, and food businesses . . . starting in 1673. (This would seem to be a work in progress — I think she expects to hear from people.)

Food and drink in Rhode Island has a rich history. In many ways, the businesses that sprang up over the past 348 years are the history of Rhode Island. This timeline pays homage to them.

Some represent the stories of immigrants bringing their foods to America and building livelihoods. All recount the ambitions and passions to create something successful, memorable and delicious.

This list of also recalls beloved restaurants and places gone but not forgotten. Those are part of each of our individual histories and memories.

Ciampa devotes a separate piece to the first wave of breakout dining back in the 70s and 80s with names like: John Rector and Leo’s, Dewey Dufresne and Joe’s, The Blue Point, George and Joanne, and Donna Ventilato of Panache. And don’t miss her “Getting lost in food memories is easy for this RI food editor” which features a wonderful photo of Yukio of New Japan!

The featured image of the old Camille’s sign was taken at the Johnson & Wales Culinary Arts Museum about a decade ago. The museum closed to the public in 2017.

Below is a mural just inside the parking garage on Washington Street which honors Luke’s Restaurant which opened in 1951. 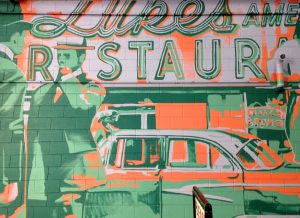