Look at this gem. The Providence Preservation Society (PPS) has issued its Most Endangered Properties List for 2021. It includes some returning favorites and a few new entries. New this year is the c. 1880 house at 234 Lenox Avenue and the PPS isn’t altogether sure what it’s doing there:

Historical maps show that the south side of Lenox Avenue, previously owned by the estate of Joseph J. Cooke, was only beginning to be developed at the turn of the 20th century. This is curious because the house at 234 Lenox is in the Italianate style—popularized in America in the mid-19th century through 1880—which begs the question, was it moved to this site? More evidence is found in the City Directory of 1921-22, when the address first appears, and the house was occupied by John McGarrahan, a building mover! Unfortunately, no building permits exist that confirm this strong suspicion.

And the new owners won’t have to be pioneering types. Some of the PPS endangered properties are a hard sell because of their remote location or dilapidated surroundings, but that is not the case here. This street is in pretty good shape; neighboring properties seem well-maintained. The street has speed bumps and there is a sizable backyard.

The state of disrepair might seem daunting, but we all saw what was possible with the Wedding Cake House and that was an absolute wreck.

I know it’s freezing right now, but just squint your eyes and picture yourself sitting out on that porch with friends . . . hot summer night . . . cold beers . . . the game is on . . . 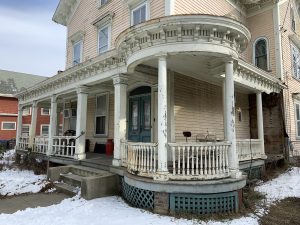