The building, he said, was a mainstay of the Black community for more than 200 years.

Prince Hall, an abolitionist and leader of the free Black community, is considered the Father of African American Freemasonry, a branch of North American Freemasonry for African Americans. The Prince Hall Masons of Rhode Island was formed in 1794, ten years after the original lodge in Boston. The temple community is determined to rebuild and by the end of December had launched a capital campaign. (Go here to contribute.)

While this is a significant loss for our lodges and chapters, it is an even greater loss for our community. Our facility was one of a handful of affordable venues that families on the Southside of Providence could go for birthday celebrations, quinceaneras, anniversaries and to gather during the time of loss of a loved one.

There was also a popular jazz venue in the basement, the Acacia Club.

In addition to the Temple’s historic and cultural significance, the building has architectural import. As such, the Providence Preservation Society has added the Eddy Street building to its 2021 Most Endangered Properties list.

The building itself was constructed in 1893 as a four-room public school building. There is strong evidence to suggest that it was designed by architect George Cady, who is responsible for the very similar—in form and detail—former Almy/Meader Street School in the Armory District. These two structures are rare in that few early wooden school buildings in Providence survive; in 1896, it was determined that all public schools would be built in brick. Like the Almy Street School, the former Eddy Street School is missing its belfry, or bell tower; it is reasonable to assume that both were lost in the hurricane of 1938, which took many church steeples locally.

Jim Vincent was personally devastated; the NAACP had been holding their meetings at the Temple for the past ten years:

“They were here before the NAACP, before the Urban League,” he said. “The Prince Hall Masons have played a historic role in terms of Black liberation.”

Providing a safe space for Black people to gather, discuss the issues affecting their communities and mobilize for change has been essential throughout history, Vincent said. With the racism that persists today, it’s as important as ever to have these spaces, he said. 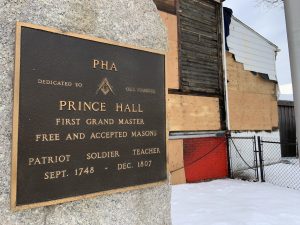