This Valentine goes out to all the amazing Black women whose efforts may very well have saved this democracy. And that is not hyperbole. First up is Stacey Abrams of course. It is no exaggeration to say that her tireless work to flip Georgia for the Democrats and flip the Senate towards sanity may have saved us from disaster. Because of Abrams, the new president may be able to get something done. And thanks to all the unnamed volunteers and staff at Fair Fight who did the hard work of registering voters and getting out the vote. And we know that Republican-led legislatures around the country are busy with their voter suppression efforts — the fight continues and Stacey Abrams will undoubtedly be in the fore. Whatever she says to do — just do it.

Back in 2013, in response to the acquittal of Trayvon Martin’s murderer, three Black organizers — Alicia Garza, Patrisse Cullors, Opal Tameti — formed Black Lives Matter. By the summer of 2020 the group had helped become a unifying force behind the George Floyd demonstrations.

Black Lives Matter is an ideological and political intervention in a world where Black lives are systematically and intentionally targeted for demise. It is an affirmation of Black folks’ humanity, our contributions to this society, and our resilience in the face of deadly oppression.

And how about Congresswoman Stacey Plaskett, the astounding member of the House Managers’ team from the Virgin Islands. What an impressive performance. She can have no regrets — nothing was going to change those “minds.” And her conclusion following the inevitable and depressing outcome was perfect:

And the Mayors! Over the course of the past supremely horrible year of unrest and death, it seemed that female Black mayors were still getting the job done while under constant threat from a socio-pathetic president and his violent white nationalist goons. Bowser, Bottoms, Lightfoot all became household names. Thank you and I’m sorry you had to go through that.

Today, more than one third of America’s top-100 cities is governed by African Americans, with many mayors being women. Among the best know are Lori Lightfoot (Chicago), London Breed (San Francisco), Keisha Lance Bottoms (Atlanta) and Muriel Bowser (Washington DC). The first black woman mayor of a large US city was Jessie Rattley, who was elected Mayor of Newport News (Virginia) in 1986. She served four years.

The most recently elected African American mayor is Ella Jones of Ferguson (Missouri), the town which in August 2014 made the news when Michael Brown, a black unarmed 18-year old teenager, was shot several times and killed by a white police officer.

That’s right, last June, Mayor Ella Jones, became not only the first Black mayor but the first woman to lead the Missouri city. (Ferguson erupted in protests in 2014 after a white police officer shot and killed Michael Brown, a Black teenager. The police officer was later judged to have acted in self-defense.) From the New York Times:

“My election gives people hope,” Ms. Jones said in an interview Wednesday. “Everybody is looking for a change, everybody wants to have a better way of life. You don’t want to go four blocks and worry about getting shot, nobody wants that. It is starting to get better. We are making changes.”

To all of these women, and the vast army of Black women who worked so tirelessly for their success, a grateful nation thanks you!

Seen here is a mural from last June painted on the boarded up windows of the Mokban Korean Bistro downtown on Westminster Street, signed by RISD sculpture student Lizzy Sour. 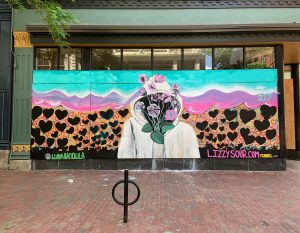