Brown University’s relentless march to the sea continues with Brook Street in the crosshairs once again. The Fox Point Neighborhood Association has been rallying opposition to two proposed dorms on either side of Brook Street. Seen here is the Bagel Gourmet plaza and (below) the buildings on Charlesfield Street, all of which will be razed to make way for a 5-story dorm on the west side of the street. However, one issue stands in their way:

While Brown has already obtained permission from the City to build these structures, a portion of the dorm proposed for the west side of the street is located in the local Historic District and is therefore subject to approval by the Historic District Commission. Brown appeared before the Commission in February, but met with such disapproval from neighbors and from Commissioners that it requested a “continuance” in order to regroup and try again later this Spring.

Aware that only a small portion of the plan comes under the purview of the HDC, the Providence Preservation Society (PPS) has nonetheless issued a statement on the entire proposal. Among their objections is this one concerning the Bagel Gourmet side of the street:

Despite the architects’ stated intentions, the massing appears monumental, and we suggest that the volume and height of the western building be concentrated at the center of the block and/or towards Charlesfield and the rest of campus with a more deferential setback of upper floors at the southern end. Greater variation in the facade design can help to minimize the massing.

The title of this piece is taken from College Hill’s Grim Reaper by Brown Daily Herald staff writer John Wrenn in which he describes how Brown’s history of demolitions, from the1950s to present, all conform to this four-word strategy that has enabled Brown to reconfigure our streetscape to suit its own needs, destroying the charm of the very neighborhood that attracted so many of its students to Providence in the first place.

The playbook of progress is simple: acquire, neglect, obscure and demolish.

This article is fascinating. Mr. Wrenn also focuses on the school’s current efforts to exclude five of their buildings from a historic district proposed by the Providence Preservation Society. We will cover that separately. 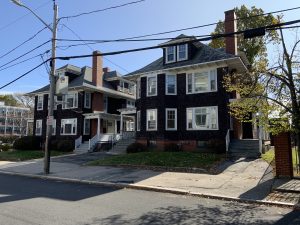