While the museum itself remains closed, some grad students and faculty members have taken over the exterior with a timely message. They have mounted a self-guided, three-part exhibit, to be experienced at one’s own pace along the sidewalk and across the street in Market Square. Scan the Qr codes as you go for a better understanding of the individual features.

“Don’t You Sit Down: Shades of Jim Crow, 1960-“ is an installation by faculty of the Department of Interior Architecture and graduate students of the department’s program in Exhibition and Narrative Environments. Through the window on North Main Street one can view four stools, saved from the Woolworth’s lunch counter which featured so prominently in the Civil Rights movement of the 60s.

Don’t You Sit Down explores racism in the US originating with Jim Crow laws from the post-Civil War era that legalized racial segregation. It was inspired by the 1960 Greensboro Sit-in which four Black college students — Ezell Blair, Franklin McCain, David Richmond and Joseph McNeil — sat at the counter of a Woolworth store in Greensboro, NC, and asked to be served.

The current owner of the stools has his own painful, 21st-century story to tell, one you will likely remember from the news. From the exhibit’s creative team:

In October 2013, more than half a century after the Sit-In and at a Starbucks in New Haven, CT, Jeffrey Fletcher, an African American police officer in uniform, was denied the bathroom key after it had just been given to a white customer before him.

As a collector of African American artifacts and the owner of four Greensboro Sit-In stools, Jeffrey met members of the faculty from RISD’s Department of Interior Architecture in February 2020. As a department with a graduate degree in Exhibition and Narrative Environments, we heard his story of Jim Crow and felt compelled to use our discipline to share it with the RISD community and the world. This is his story and the story of everyone who has experienced segregation, past, present and future.

A quote sometimes attributed to Mark Twain is painfully apt here: “History does not repeat itself, but it often rhymes.”

The stools are hard to photograph through the windows. 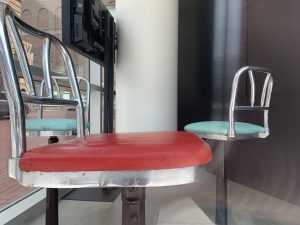