[Update: The humps on South Angell have been scraped down in response to complaints.] These “traffic calming” devices have only just appeared and already they are badly scraped up . . . I hope that’s red paint. They were clearly designed by someone driving a monster truck, or the owner of an undercarriage repair business. Who will be liable for damaged oil pans, ripped up mufflers, or worse? Did anyone think to measure the height of these things? Small cars have been navigating these hazards by driving in between them, often leaving their lane.

This picture is taken on South Angell where the humps appear to have been installed for the sole purpose of creating a dangerous logjam as well as undercarriage damage for cars coming off the Henderson Bridge. As someone who has been crossing this span at least twice a day since the new RIDOT project began, I can say that this was a solution in search of a problem. Worse, there’s yet another set of humps before drivers even get to Butler Avenue.

This same system is being installed on Rochambeau Avenue with about four sets between North Main Street and Hope Street. This helpful sign (below) should say “Seek alternate routes.” 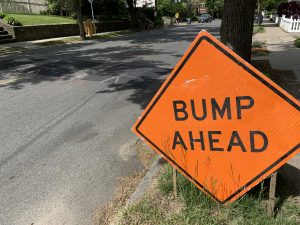 Below is the first array crossing South Angell Street just as cars come off the Henderson Bridge. All humps are scraped. 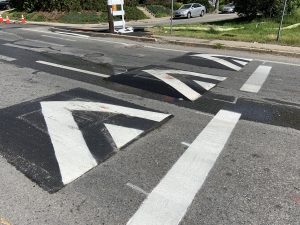