The City Plan Commission will be holding a public information meeting in August for a major land development project in Wayland Square on the site of the former funeral home at 230 Waterman Street.

The proposal includes demolition of the existing 1892 building (unprotected because it is not part of a local historic district) and construction of a five-story mixed use building. In a letter to developer ZDS and the CPC the Providence Preservation Society (PPS) expresses its opposition to the demolition of this 1892 structure, making suggestions for how it could be integrated into a new project. From PPS executive director Brent Runyon:

New construction in an ell around the building that incorporates the footprints of the later funeral home additions on the north and east sides of the original house and the pub would be a better alternative. Retention of the beloved pub establishment should be prioritized (and we are not arguing otherwise), but a rearrangement of spaces on these two sites and placement of new construction should be examined. We strongly urge you to reconsider the site plan and demolition of the house.

We can only hope. The next CDC meeting is scheduled for August 17th. Meeting agendas are published one week in advance of the meeting and are available for public review at the City Clerk’s office, the CDC page, as well as the Secretary of State’s Open Meeting page. Secretary Gorbea notes that as of July 24th, all public meetings must be held in person; they may also live-stream the event.

In related news: Brown University has just purchased River House apartments to convert it into a dorm.

ZDS projects include the commercial modular item below at 1290 Westminster Street. (I stopped to take this picture in May for a piece I was considering on these generic, cheap-looking commercial mixed use properties popping up around town.) See also their rendering of the Angell Street Hotel! 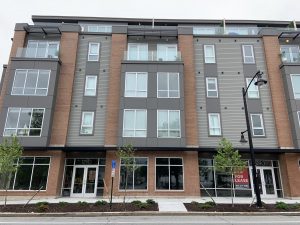