Over the years, the natural East Side watershed that feeds the Seekonk River has been badly compromised. The streams and little ponds that once filtered rain runoff have been paved over and diverted into culverts and storm sewers. During periods of heavy rain, unfiltered storm-water sluices down the hillside into York Pond (seen here) and over road surfaces into the Seekonk River.

A comprehensive report in the Sunday Providence Journal by Alex Kuffner — Taming the torrent won’t be cheap — covers the problems we face now with an eye on the the worsening effects of climate change. Happily, there is a cohort of motivated and qualified citizens focused on doing something about it.

The plan for the Seekonk is ambitious — its authors estimate it could cost upwards of $10 million to complete — but it’s also one of the most promising proposals seen so far by the Providence Resilience Partnership, a group that formed last year to support work that will protect Rhode Island’s capital city from the impacts of climate change.

As to the funding, organizers have their eyes on the federal government:

The immediate opportunity would come from a proposed trillion-dollar federal infrastructure bill, which passed the Senate in August and is expected to come up for a vote in the House later this month. And more money could come from the $3.5-trillion budget plan proposed by President Joseph Biden.

Fingers crossed . . . one way or another, funding must be found. Go here to learn more about the entities mentioned in the article: The Seekonk Riverbank Revitalization Alliance and the Providence Resilience Partnership.

Go get a hands-on look at the situation: The Blackstone Park Conservancy has outdoor events scheduled. 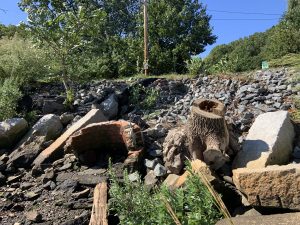 The river bank across River Road from York Pond. Hard to know how this jumble once fit together.