Look who makes a great Santa! I stopped by NicoBella’s downtown last Sunday to inquire about an upcoming art show, only to be greeted by owner Daniel Crenca all suited up and checking my naughty/nice status at the door. He will be adopting this persona on Thursday, Fridays, and Saturdays through the season. As you can see from the photo below, he sometimes wanders out into the street waving at cars which you can only do if you are dressed as Santa Claus.

Daniel is the proud brother of artist and AS220 founder Bert Crenca who spent his quarantine year producing “Divine Providence,” a wondrous series of paintings of local streetscapes. (NicoBella’s will be hosting a book signing and gallery show on December 19th — we will remind you closer to the date.)

Daniel has been chronicling the Crenca family history which office manager Valerie Auth was kind enough to pass it along; he certainly has deep roots in the Providence restaurant scene.

At 15 years old I found myself washing dishes at a popular late night breakfast spot, Railroad Deli. I was later introduced to serving dinners and working in the kitchen at my cousin’s restaurant, Alfredo’s on Thayer Street. At the early age of 18, I worked with one of Rhode Island’s and the region’s leading chef’s, Nino, at Capriccio.

Those cousins, the Andreozzi family, began serving food around town in the early 1920s.

The restaurant, Welcome Cafe, would be run by the Andreozzi family for 38 years, and Alfredo’s would be operated by one of the Andreozzi’s offspring, Alfred, in Providence for 28 years.

Alfredo’s! My family went there all the time.

So go in and congratulate the NicoBella’s crew for surviving the quarantine and enjoy the great food. You will be surrounded on all sides by Bert Crenca’s art from before his Divine inspiration. The style and subject matter are rather different.

The restaurant is open seven days. As with all businesses these days, they are still trying to get fully staffed; they would like to extend their hours, and a new restaurant is in the works for Cranston.

Breakfast served at all hours of operation. Lunch menu starts at 11am. 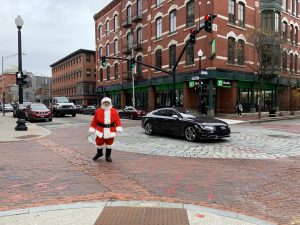 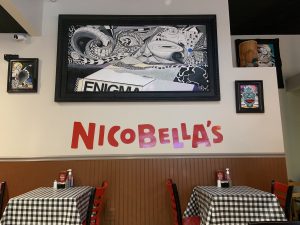 The walls are covered with the earlier work of Daniel’s brother, Bert Crenca. A book-signing of his new work is scheduled for December 19.