State environmental regulators issued an advisory yesterday concerning the ongoing discharges of partially treated sewage from the Woonsocket treatment plant. An initial advisory was issued last Sunday, June 5, by the Department of Environmental Management (DEM) and I sort of thought the problem would have been fixed by now.

Obviously everyone living downstream has a stake in this problem. What is being done to protect those who regularly use the Seekonk River for fishing, canoeing, and kayaking?

At DEM’s direction, plant personnel are continuing to take samples upstream and downstream of the plant outfall for analysis. After the June 5 no-contact advisory went into effect, a DEM crew collected water samples at a series of 20 locations in the estuarine portion of the Providence and Seekonk Rivers from just below Slater Dam south to Conimicut Point [Warwick]. Analysis of these samples indicated that fecal coliform bacteria levels in the Seekonk River were not elevated and that the discharge was not adversely affecting the water quality of shellfish grounds in the lower Providence River and Upper Narragansett Bay.

Seen here is the Gano Street boat launch on the Seekonk River. Go left for the Slater Mill. 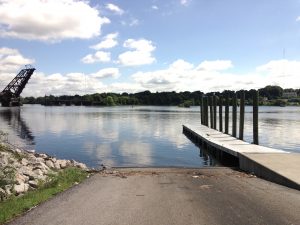