Only a few weeks till the return of the world’s premier weird fiction convention: Necronomicon Providence — featuring panels, films, gaming, vendors, weird art, readings, concerts, HPL tours, and more. People come from around the world for this event which will run from August 18 through the 21st.

Holding down the fort last Friday at the Lovecraft Arts & Sciences Council was Despina — seen here holding a fabric Cthulhu mask (which is for sale) — who shared with me some of the speakers, reading authors, and panelists on the the guests of honor schedule they are looking forward to. (Events are still coming together, so some changes may occur.)

Gemma Files is a journalist, film critic, and poet who authored the award-winning novel “Experimental Film.”

Kier-La Janisse, founder of The Miskatonic Institute of Horror Studies, is a prolific writer, she is a house editor and producer of bonus features at Severin Films, where she made her first film as a writer/director/producer, the award-winning Woodlands Dark and Days Bewitched: A History of Folk Horror (2021).

Cassandra Khaw, whose books include Hammers on Bone, The All-Consuming World, and the Bram Stoker Award Finalist Nothing But Blackened Teeth, a Japanese haunted house story described as “sharp, playful, and nasty as hell.” They are also an award-winning game writer.

Jonathan Sims is a writer, performer, games designer and the mind and the voice behind acclaimed horror podcast “The Magnus Archives.” He was also frontman of the Mechanisms, what Despina described as a “Norwegian myth, pirate fantasy band.”

We may not get to see the Mechanisms, but music is on the schedule: NecronomiCon Providence and Armageddon Shop will be hosting a show at the Columbus Theatre on Friday, August 19, featuring Cirith Ungol, Warhorse, and Sanhedrin.

Venues: The Graduate Hotel (registration, events in ballroom, gaming) and the Omni Hotel (vendors hall, panels) are the two main venues this year, and it looks like AS220 will be hosting the art show.

General passes and one-day passes are available now. But the golden key and silver key passes are sold out. Stop by the shop and buy that Cthulhu mask! Open daily. 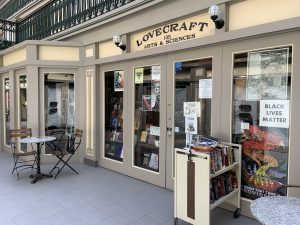