(9.1) David Segal’s rallies are the best: good live music with good live people. This September 1st his campaign will be taking over Revival Brewery and Lost Valley Pizza on Sims Avenue for a Rally and Festival. This invitation comes from musician and labor historian Joey DeFrancesco who I believe will be on stage at some point.

(That’s quite a card. I think ‘Malportado Kids’ translates to something like . . . Downtown Boys?)

Why we need David Segal to represent RI’s Second Congressional District: He’s been fighting corporate special interests and political corruption for decades, first in the Providence City Council and then as a rep in the RI General Assembly. Since then he has served as executive director for the national advocacy nonprofit organization, Demand Progress, which frequently had him down in Washington using his considerable powers of persuasion on our legislators. Maybe this is why Senator Elizabeth Warren has given him her endorsement:

I’ve worked with David Segal on plans to level the economic playing field, support a responsible foreign policy, and build a government that Americans can trust to work for them.

And, none other than Jane Fonda has also endorsed his candidacy, “David has exactly the vision and commitment we need to phase out fossil fuels and address the climate crisis head-on.”

Go here to read David’s piece last June in the ProJo: Now is the time for a growing labor movement in RI.

*Complete disclosure: David Segal is one the founders of The Providence Daily Dose.

Here’s the man filing his papers at the Secretary of State’s Office last June. 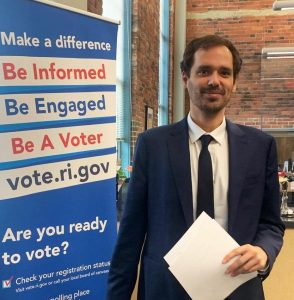