Dusk will be the place to be this weekend as friends, musicians, and fans gather to remember drummer Nick Iddon with music and memories. Music writer Rob Duguay knew him personally and has written a wonderful piece (complete with must-see video) for the ProJo:

When Nick Iddon died of lung cancer on March 15 at age 44, it left a major void in the Providence music scene. Since the late 1990s, the Fairhaven, Massachusetts, native was a local fixture, thanks to his excellent drumming skills for bands such as Kanerko, The Quahogs, Viking Jesus, The Sonce, Ravi Shavi and others.

Yes, you read that correctly — those are all bands Iddon had played with at one time or another. Is it any wonder that his friends could fill two days with music? Go to the Facebook event page for the complete two-day schedule which includes all those bands and at least fifteen more.

Duguay explains the origin of the name, “The idea for Shiza Fest (named for one of the many unique and colorful “Iddonisms” he was known for among friends) was born when a bunch of Iddon’s bandmates gathered at Nolan’s Corner Pub on Atwells Avenue, and one of them had a date booked for September at Dusk.”

The festival kicks off at 1pm on Saturday afternoon, September 17th and runs to 1am, Monday morning, September 19th. We should all have so many friends!

Three summers ago I went to see the Quahogs downtown in Burnside Park and was so taken with the drummer that I worked my way behind the stage to take some pictures. I did not know who he was at the time. I do now. 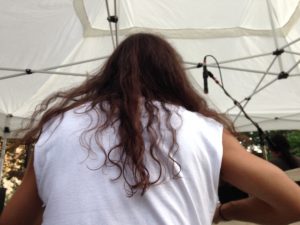