Finally, a mural that isn’t staring at me. I have been hoping for a while that we could get a few abstracts, trompe l’oeil, or even animals into the mix. It’s enough having actual surveillance cameras everywhere without all these giant faces looking at me, so I rather liked this recent entry even before I knew the inspiration behind it.

Maine artist Ryan Adams wants “Stay Strong, Fight On” to be a message of “hope, encouragement, and resilience.”

In the wake of The Supreme Court overturning Roe v. Wade, Ryan felt especially drawn to rallying cries on behalf of his two young daughters, however he wants anyone viewing and interpreting his mural to keep fighting against any encountered struggles, from the uniquely personal to society’s challenges at large.

We need more dads like this! (The slideshow includes his charming daughters . . . helping.)

The mural comes courtesy of Shawmut Design & Construction, collaborating with the public art non-profit The Avenue Concept. This wall is located on a private stretch of Ship Street found behind the Dune Brothers Seafood Shack (open Weds thru Sunday).

It’s a little like the Magic Eye images from a while back. I had to stand back a bit. 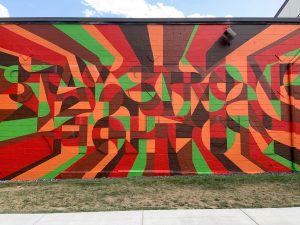 Ryan Adams is a painter and muralist residing in his hometown of Portland, Maine. His background in traditional graffiti led him to creating large-scale mural work and hand lettered design and signage. His signature ‘gem’ style of bold, colorful and clever work is a geometric breakdown of letterforms with shadows and highlights included to create depth and movement throughout the pieces.

1 thought on “New Mural A Response To ‘Dobbs’”